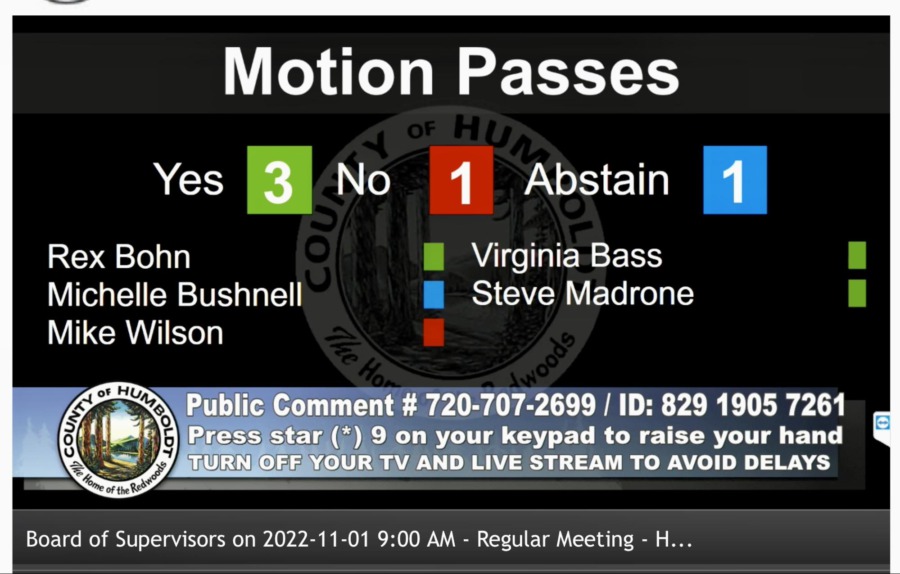 Amendment to Measure S passes 3 to 1 with one abstention/recusal.

This week, the Humboldt County Board of Supervisors decided to lift the Measure S marijuana cultivation tax for two years, with the ballot language to be revised in the next 24 months. They voted after having heard over two dozen public comments, all from people representing various parts of the cannabis community, most passionately articulating why they supported a complete elimination of the Measure S cannabis excise tax.

On Tuesday November 2, the Board declared that there will be no cultivation excise taxes due for the 2022 and 2023 cultivation seasons. (This is not a delay in payments. This is complete relief from having to pay this particular Humboldt County specific tax, but not other taxes levied on cannabis farmers.) This provides a brief reprieve from the challenging market conditions that have made cannabis cultivation in Humboldt County, financially difficult. Now, local farmers have one less bill to pay among the existing grip of fees, taxes, and expenses already coming their way.

According to Executive Director of North Coast Growers Alliance, Natalynne DeLapp, who spoke to us later this week but was also present to offer public comment in support of eliminating the tax at the Humboldt County Board of Supervisors meeting, the county will be working on a payment plan to allow farmers to make installments for back taxes. DeLapp noted that because the board reduced taxes due from the cultivation year 2021 and those are still being collected, that those will be able to be paid with a payment plan, soon to be determined by the board.  DeLapp explained that earlier this year “there was an 85% reduction in Measure S fees. The first installment was due in April 2022. The second installment was due October 15, 2022. There are no penalties for late payments paid by October 15, 2023.”

During the public comment period at the Board of Supervisors Meeting, over two dozen community members spoke on the subject, and provided testimonials for greater awareness of their concerns. Every commenter, calling in or appearing in person before the Board of Supervisors requested a total or near full suspension of the Measure S cannabis excise tax. One Southern Humboldt cultivator called in and described having a near total loss in sales revenue two years in a row– one year sending out 136 pounds only to get stiffed, and then this past year forwarding 300 pounds of cannabis flower to a distributor which only paid the farmer an equivalent of $11.66 per unit, after the outfit failed to pay for the total number of pounds and only paid $3500 in total for the shipment.

After hearing from the community during public comment, Supervisor Steve Madrone said that the taxation of cannabis with the economy as it is, feels much like “extracting blood from a bud.” At first, he suggested he would support at least a one-year cancellation of the tax on cannabis farming, but ultimately was swayed by First District Supervisor Rex Bohn’s insistence that local farmers needed more time to recover.