California, Commerce council & cannabis. It’s got it all unhappy Scientoligists, fisticuffs in the chamber and more

The Commerce City Council meeting had started when Councilman Leonard Mendoza stepped onto the dais and sat a seat away from Mayor Pro Tem Ivan Altamirano, the man he accused of sucker-punching him.

A month earlier, a brawl involving four Commerce officials at a government convention in Indian Wells brought out the police and generated national headlines.

There were no physical clashes at this council meeting. But there were arguments over an issue that had divided this working-class industrial town southeast of downtown L.A. for some time — cannabis. Many believe this was part of the reason for the fight at Indian Wells, and officials clashed again at the meeting over how much the city should embrace cannabis businesses. It got so heated that a councilwoman had to apologize to a high school girls water polo team sitting in the audience.

At the heart of the problems in Commerce is mistrust toward officials in City Hall, with residents calling on city leaders to allow voters to weigh in on whether cannabis businesses should operate in the city.

Read on. It’ll be a while before Commerce has cannabis commerce. 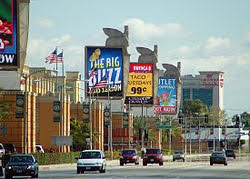