Yesterday,(24 June 2020)  Dr. Teresa Frankovich, the Humboldt County Public Health Officer, continued her policy of not releasing information about even patient details that would seem to still leave the patients unidentifiable to the community. She would not confirm that information we received independently was correct. However, we have learned from an anonymous source that the nine additional COVID-19 positive cases which were confirmed yesterday were connected to one Southern Humboldt cannabis farm but those infected did not reside (or at least most did not reside) in the Southern Humboldt area.

Frankovich said in the video we posted early this morning, “As you know, we don’t comment on, you know, particular infections in specific workplaces unless it’s relevant to public safety.”

6 We’re being told that group of people tested positive for COVID-19 in Southern Humboldt today and all are connected to a single cannabis farm. Is that true and if so, is the farm legal? – Are the people testing positive from Humboldt County? from California? from out of state? Or from international areas such as Mexico? – At this point do we have a sense of how widely they traveled in Humboldt? – Will they show up as if they are from Southern Humboldt in the location results the County puts out for COVID-19 tests if they live elsewhere? – Can you address your concerns with the cannabis community?

We requested information that would give us an idea in what general area the original residences of the persons infected were located. We asked, “Are the people testing positive from Humboldt County? From California? From out of state? Or from international areas such as Mexico? At this point do we have a sense of how widely they traveled in Humboldt?”

For reasons involving patient privacy, Dr. Frankovich declined to answer. She did say that if they lived in other parts of the county and traveled to Southern Humboldt, they would be listed not as Southern Humboldt infections but rather as infections in the areas they resided. So on Friday when the geographic distribution is provided, the new infections won’t show in Southern Humboldt.

Although Frankovich also declined to say how widely the new cases had traveled throughout the region, contract tracers will be working to identify those the nine people interacted with and reaching out to them.

Speaking generally, Frankovich noted that because some cannabis grows hire “people from all over, they have certain challenges.” She encouraged cultivators to contact the confidential communicable disease line at (707) 268-2182. She said, “We want to make sure that whether they are legal or not legal operations, that they understand we’d like to work with them. Basically if they have someone sick, we’d like to be able to help work with them to get people tested and to really just make sure everyone around them is safe.”

Cultivators who have people working on their farms, whether legally or illegally, should consider getting everyone tested even if no one is experiencing symptoms. Dr. Frankovich noted, If cultivators “are interested in doing some screening testing, we would be really happy to work with them on that as well. I think it’s an important population for us to keep healthy because it impacts not only the individuals but our community.”

Coincidentally, earlier this week there was a mobile unit offering free testing available in Redway. We don’t know when the next available free testing in the area will be available but the COVID hotline at (707) 441-5000 should be able to offer some answers. In addition, Redwoods Rural Health Care in Redway has testing for those experiencing more serious symptoms. Call for pre-screening first at (707) 923-2783. 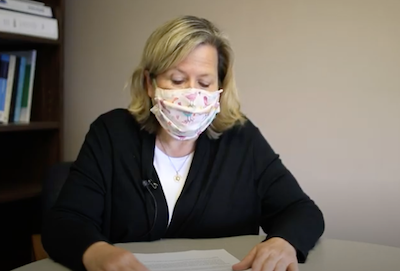