A Toronto woman is frustrated with the red tape she says she has faced while attempting to open a pot store.

Vivianne Wilson, who is working to set up her store called GreenPort at 686 College St., says the Alcohol and Gaming Commission of Ontario’s cannabis retail licencing process is out of whack.

She says there is no transparency and the ordeal to open her store has so far taken 253 days.

“As a small business owner, carrying the costs of a business for 253 days without generating income is
crippling. The pandemic further confirmed this fact,” said Wilson, the first and only female Black independent owner and operator of a Canadian cannabis retail business.

“My aim is to provide diversity and representation which is presently absent from the Canadian cannabis industry. I am extremely proud to have independently founded a cannabis company that was awarded a federal cannabis sales licence in 2019,” Wilson added. 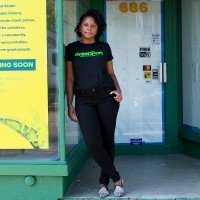