Like everything else in this administration it’s all about upping the stakes for the next episode. Although  let’s be honest the idea of “Apprentice” AG is a little scary to say the least.

But it’s a fact that at the moment Sessions and his 80’s drug policy approach is a disaster in the wings unless you happen to own shares in the private incarceration business.

Here’s some of what Civilized has to say

The honeymoon between President Donald Trump and Attorney General Jeff Sessions is over. And the rift between the commander-in-chief and his top law enforcer could be a huge win for the movement to legalize marijuana.

The Trump-Sessions tryst has allegedly been on the rocks since late April, when Sessions – bowing to pressure from Capitol Hill – recused himself from the investigation into the Trump campaign’s possible ties with Russia. That concession to Congress was unforgivable in Trump’s eyes, according to Chris Cillizza of CNN.

“Sessions admitted he did something wrong,” Cillizza wrote. “He made a concession that, in Trump’s mind, is the root of many of the Russia-related problems he is now dealing with.”

Since then, Trump’s former favorite has become his whipping boy. Earlier this week, Trump blamed Sessions’ Department of Justice for the problems the administration has had with passing a travel ban that would prevent people from Syria and 5 other predominantly Muslim countries from entering America.

Trump didn’t mention Sessions by name in the tweet — just like he isn’t mentioning him in the White House much these days. At least not with White House Press Secretary Sean Spicer. When reporters asked Spicer if Trump had lost confidence in Sessions, Spicer said,  “I have not had a discussion with him about that.” Which is about as bad as saying ‘let me think about it’ when someone asks if you love them.

A Win for Cannabis Legalization

Sessions’ falling out with Trump is great news for the legalization movement because the attorney general is one of the biggest cheerleaders for pot prohibition in America today. He’s repeatedly flirted with the idea of cracking down on marijuana use across the country. Last March, he made the ridiculous claim that marijuana is “only slightly less awful” than heroin. And last year he said “good people don’t smoke marijuana” during a Senate hearing.

Read on at https://www.civilized.life/articles/trump-jeff-sessions-rift-marijuana-legalization/ and we can be pretty sure this isn’t the last we are going to read / hear on the subject 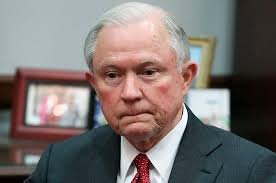