Ondara Directorship has already prepared its greenhouse located in the Soria town of Garray to change the cultivation of red roses for that of the medicinal cannabis flower, as reported by the company through a statement.

Full Moon Investments (FMI), the parent company of Ondara, began in June 2020 the purchase of the production plant, then owned by Aleia Rosas and dedicated entirely to the cultivation of the red rose , “acquiring the commitment to invest in this asset , its workers and in the social and economic environment “. This was the largest red rose growing greenhouse in Europe.

The company, after having carried out an intensive cleaning, continues with the pertinent adaptations in the greenhouse and in the rest of the facilities, in order to dedicate itself to the cultivation of the medicinal cannabis flower.

The cleaning began several weeks ago with the collaboration of the entire staff and the installation of equipment to improve the security of the entire premises , among other tasks , has already begun .

These advances will allow Ondara to begin, as soon as the Spanish Agency for Medicines and Health Products (AEMPS) grants the permit, with the validation batches necessary to obtain the definitive license.

This license would allow the company to start growing this plant for medicinal purposes in 3.5 hectares of its greenhouse, which represents 25 percent of its surface.

The company now seeks “to expand its commitment to the society of Soria and Castilla y León with this new and ambitious project”, which represents an initial investment of six million euros and the reorientation of workers linked to the company to this crop .

At the time of their reinstatement, the staff will have the opportunity to qualify and train in the necessary skills to qualify for professional development, since the jobs in Ondara’s cannabis production will require the development of technical skills, which in turn its turn implies a higher level of qualification. In addition, new professionals will be incorporated, which will mean a notable import of talent to the province. 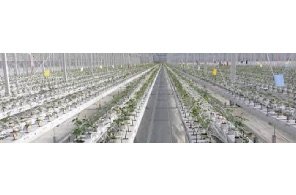