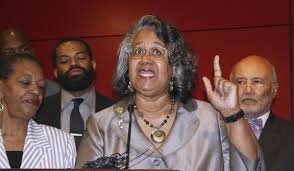 A former state lawmaker who helped create Maryland’s medical marijuana industry was sentenced to two years in prison for taking bribes for legislative favors, including votes to benefit a medical marijuana company.

During Wednesday’s sentencing, U.S. District Judge Catherine Blake said Cheryl Glenn, 69, sold her office to pay her bills and tried to cover up her corruption.

Glenn, a Democrat who represented parts of Baltimore as a state delegate, must report to prison by Sept. 21. The judge also ordered her to pay $18,750 in restitution

Also in the Baltimore Business Journal

Former Baltimore Del. Cheryl Glenn was sentenced to twoyears in prison on Wednesday, seven months after pleading guilty in federal court to charges related to accepting bribes in exchange for political favors.

Glenn must also serve three years of probation and pay both forfeiture and restitution in the amount of $18,750 each.

“This is a very serious offense. Simply put, former Del. Glenn sold her public office to pay her bills,” U.S. District Court Judge Catherine C. Blake said in handing down the sentence. “This was not a one-time lapse… this was a scheme.”

Glenn, 69, had requested home detention, citing concerns about the coronavirus pandemic given her age and medical history, as well as her lack of prior convictions. Prosecutors had sought three years, arguing Glenn knowingly sought bribes and that prison time was necessary to set an example for other politicians.