Special Narcotics Prosecutor Bridget G. Brennan said, “The NYPD and Office of Special Narcotics responded to community complaints and concerns about illegal drug dealing in commercial establishments. I thank those who care enough about their neighborhoods and protecting public safety to alert us to the ongoing problem of distribution of illegal substances by purportedly legitimate businesses.”

According to court documents, an investigation began due to a series of community complaints. The investigation involved a series of undercover purchases and court-authorized searches by members of the NYPD Narcotics Borough Manhattan South.

The investigation allegedly revealed that the psychedelic mushrooms were stored and sold inside a secret back area of Come Back Daily and customers that were interested in purchasing them would allegedly pass through a public section of the store and say a code phrase to a receptionist. Buyers were then allegedly directed to a hidden door that led to a back room that contained a counter, an office/storage area and a lounge, and in this area, the customers would allegedly purchase illegal controlled substances, such as psilocybin mushrooms in various forms. 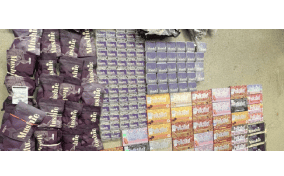