Speaking from Dubai where he is now based, the girl’s uncle told Belgian media: ‘We will react, but not as the mayor of Antwerp thinks’ reports the Sunday World

An 11-year-old girl who died after a shooting incident linked to the illegal drug trade in the Belgian port city of Antwerp is the niece of a reputed major international cocaine dealer, it has been claimed.

Local police told national news agency Belga the child was killed by shrapnel on Monday, after bullets fired by attackers into a house in the Merksem area caused a microwave to explode.

The girl was rushed to hospital alongside three other residents who were in the house at the time, including her father (58) and his two other daughters, aged 13 and 18, who were treated for minor injuries.

It has been reported that she is the niece of a “one of the largest cocaine smugglers our country has ever produced,” who Belgian media have been writing about for years.

“The local police in Antwerp received an emergency call about the shooting on Monday evening at 6.24pm,” local media stated.

“It turned out that a garage door of a terraced house had been shot at. Five shell casings were found in front of the house. Based on these bullet casings, the public prosecutor’s office believes that an assault rifle was fired.”

Belgium’s interior minister Annelies Verlinden tweeted: “Horrible tragedy where an innocent child has died. The investigation is ongoing, but we will do everything we can to apprehend these ruthless criminals. Children have nothing to do with any drug war.”

The city’s mayor Bart De Wever told VRT television the home targeted in the shooting belonged to a family known to be involved in the drug trade and that the attack appeared to be a “settling of scores”.

“A drug war is underway, criminals attack the houses of other criminals,” he said.

“We have been witnessing this for months and what I feared for a long time has happened, there has been an innocent victim, a child.”

Speaking from Dubai where he is now based, the girl’s uncle told Belgian media: “We will react, but not as the mayor of Antwerp thinks.”

“(He) denies intending violent revenge and says (He) wants to cooperate with the police investigation,” it has been reported.

A spokesman for the Antwerp prosecutor’s office said links to the drug trade were being “investigated”.

However, as his sister is not associated with criminal activities by the Belgian judiciary, “there are therefore no indications that the residents of the affected building themselves are involved in drug trafficking,” local reports added.

It is just the latest voice incident in Antwerp in the past year where the homes of family members of drug criminals have been targeted by rival gangs. 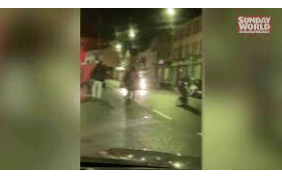