ill Ogden was a legendary artist in the surf world. He’s was most famous for painting  the cover for the 1974 surf movie Forgotten Island of Santosha and his painting of the Banzai Pipeline for the 2010 Billabong Pipe Masters surf contest.

But just like the Forgotten Island of Santosha Bill is about to be forgotten, forever.

This article is the last gasp.

There is no mention of Bill in the Encyclopedia of Surfing and his art is in no surf museum. Bill is being erased by surf culture and heritage.

In the  60’s Bill moved from LA to Laguna Beach. 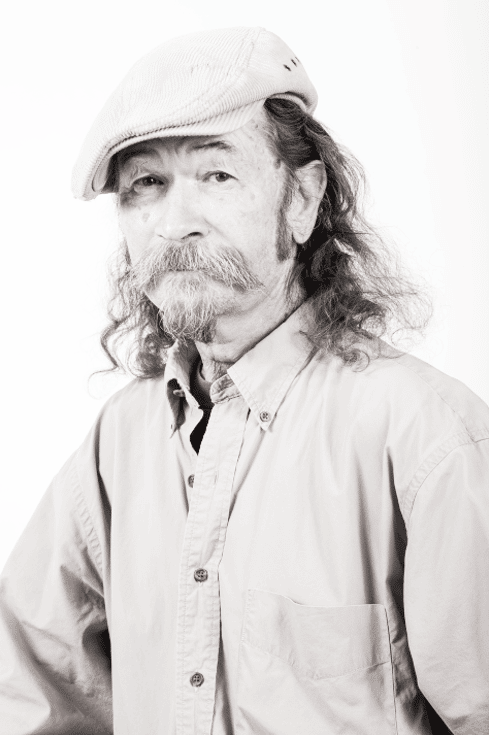 He quickly became part of the counter culture and hippie movement at the time.

His art caught the attention of a movement in the Laguna Beach called, “The Brotherhood of Eternal light”.

The Brotherhood was a bunch of rich surfers that had money, money from their parents, money for drugs.

This group loved Bill’s art and thought it reflected the mission of the group, and the mission was to change the world with love through LSD.

The Brotherhood welcomed Bill with open arms. Every movement needed a marketing department, and that was Bill.

In return, Bill got all the acid he wanted.

In Bill’s words, “I was a test pilot, they would test it on me”.

A test pilot for the most famous acid/LSD of all time, Orange Sunshine.

Sex, drugs and rock n roll on repeat. Big-time parties were had, rituals performed. This was the 1960’s and acid was still legal. The Brotherhood’s headquarters was in Laguna Canyon and they were making acid/LSD by the sheets.

Conservative America quickly caught on and made acid/LSD illegal in October 1966 with a very public arrest of Timothy Leary.

Leary was a psychologist and author and a very public supporter of LSD. Timothy became the face of the hippie movement and partnered up with the Brotherhood and the cops knew it.

When Leary got arrested The Brotherhood turned to their in-house artist Bill Ogden. They had Bill create a poster asking the public to donate between $100,000 and $500,000 to bail Leary out of jail.

So they devised a plan to break him out of jail.

After this event, half of the hippies left Laguna Beach and headed for the mountains of Idlewild, California. Leary went with them.

The cops slowly started rounding up and arresting the hippies in Laguna. But the hippies were not done with Laguna Beach, they had one more trick up their sleeve.

In 1970 Laguna Canyon hosted The Great Christmas Happening, “the last gasp of hippiedom”.

The Brotherhood wanted to throw the biggest party the world had ever seen. A spiritual music and arts festival that promised a free light show, free music, free food, free beer, free art, free sex and a chance to meet the festival’s special guest, “JESUS CHRIST”.

The Brotherhood looked to Bill Ogden to create the flyer.

Bill made the flyer and it was sent out across the USA encouraging all hippies to come to Laguna on Christmas Day. Unfortunately Bill signed the flyer.

His name was the only name on it.

Hundreds of thousands of hippies showed up to Laguna from all over the country. The festival happened and it was a complete disaster. No light show. No food. No Grateful Dead. No beer.

And, yeah, no Jesus.

It was cold, soggy and rainy. The only free thing there was, was an air drop, from the sky of 10,000 LSD Orange Sunshine acid tabs onto the entire crowd courtesy of the Brotherhood’s private plane.

The next day is referred to as The Big Bust. The Laguna Beach cops rounded up all the hippies and threw them in jail, starting with Bill Ogden.

When Bill got out of jail, he wanted to change.

He didn’t want to be associated with the Brotherhood. Bill started doing some poster art around town and switched his focus to surf art.

Bill had a new approach. He would mix surf art with psychedelia.

John and Bill worked out a deal where Bill would have the back cover of Surfer, exclusively doing artwork for a swimwear company called Jatzen. This went on for four years, from 1973-1977. If you read Surfer magazine during that time, you’ll recognise the art.

This residency with Surfer sky-rocketed Bill into the surf space.

Soon, he was working with every top surf brand, including Billabong and Quiksilver. Everyone wanted a chance to work with him.

“My art was a reflection of the culture,” said Bill, “and that seemed to resonated with people.”

Over time, Bill became increasingly difficult to work with.

Bill tried to compete with the art scene in Laguna Beach but his damaged relationships made it impossible for him to succeed. So just like the hippies before him, Bill retreated into the mountains of Idlewild, where he would stay, alone in a cabin, painting.

Over the next decade, Bill lived on Bill’s terms. It wasn’t much but Bill was happy to paint in the hills, in the arms of the Idlewild mountains.

But, Bill was lonely, very lonely.

He was alone. No wife. No kids. No family.

Until three years ago, Bill  got a call. Then a message on Facebook.
This is how the message read.

“Hi, my name is Brittony and I think you’re my father.”

What?? This message blew Bill’s mind. It had to be a mistake.

The two started talking on the phone. Bill was sure it was a mistake.

How did you find me, he asked?

When Brittony was 18 years old her mother, a hooker and junkie, had died. One year before her death, she asked her mom who her real Dad was.

Her mom gave her the names of three men.

Brit would hold on to those names for almost three decades.

Brittony had a tough life. Growing up without her mother and her father, Brittony was left to face this world alone. She moved from San Diego to LA and got involved with drugs and started living on the streets.

Soon, Brittony would see all her friends die of a drug overdoses or go to jail.

She made a decision to crawl her way out of her situation.  She quit doing drugs and started to get involved with health medicine and spirituality.

Brittony made a commitment to herself. She was not going to end up like her friends. Over the next few years she started to thrive. Looking and feeling good.

She moved up to San Francisco and got heavily involved in the health food scene. Her life became more about self-love, self-care and she did it all on her own.

She was a miracle.

One day, Brittony started thinking about those three names her mom gave her before she died. It had been decades since she really thought about it and plus social media didn’t even exist back then.

Then Brittony searched the name Bill Ogden. That’s when all space and time stopped. Brittony whole body went into chills. The image of Bill’s face appeared on Brittony’s screen and she began to weep uncontrollably.

The image of the man was a identical copy of her face. It was her Dad.

As Brit started to search Bill’s page, she quickly discovered her father was an artist. A very good artist.

Yes, Bill Ogden looked like Brittony. Those almond eyes were the big giveaway. But, she had to be sure. She sent him a message.

The two started talking on the phone regularly. And Bill was excited at the possibility that he had a daughter.

Bill agreed to a DNA test and it came back an exact match. Bill Goden…was… Brit’s father.

When Bill received the news that it was true, that he really did have a daughter, he told her,

“I was hoping it was true”

Those words from Bill, her father, were the greatest words she had ever heard. It was the most special moment of her life. To know that her father wanted her.

Brit showed Bill a picture of her mother.

Bill recalled a day in the Laguna canyon, where he lived at the time.

He remembered taking a shower and hearing a noise in the backyard, and watched as a hippie girl climbed over his fence. The girl saw Bill and hopped in the shower with him. The two had sex and she jumped out of the shower, never to be seen again.

It’s a pretty wild story but hey, it was the summer of love.

Over the next few years, Bill and Brit would meet up. They were planning to travel together. All the these questions about her past and who she was were being answered. Brit now had a Dad and Bill had a daughter.

It was a beautiful thing. A second chapter in life. A chapter of love, hope and optimism.

Everything was going good.

Who am I and how do I know all this stuff?

I’m a surf journalist and I  was was in the process of interviewing Bill.

I recorded over five hours of Bill talking and telling stories.

I reached out to him a year ago and to talk about his art.

Bill had all these great ideas and hoped I could help him get his art out there again, even have an exhibition. He told me he was still creating tons of art and was excited about the future.

Then Bill stoped responding to my texts. He didn’t call me back. I left messages. Four days went by and I started to worry. I had the police stop by his home for a wellness check. That’s when they discovered his body.

Bill Ogden was dead. Found in his art studio. He died doing what he loved.

The sheriff gave me the coronor’s phone number. The cops found Bill’s dog and put her in the pound.

Britt was crushed. The Dad she had found was gone. They had three sweet years together.

Now, she’ll come down from Northern California and pick up the pieces of what’s left of her father’s life.

She doesn’t make much money and this whole thing is a struggle, emotionally and financially.

She needs help. She would like to cremate her father and return him to the ocean he loved. 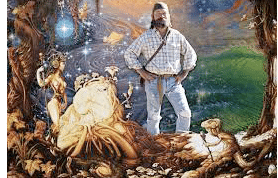