The head of the American Bankers Association (ABA) is predicting that the House of Representatives will pass legislation allowing banks to service state-legal marijuana businesses as early as this month and no later than October.

In an interview on the podcast Engage with Andy Busch that was released on Friday, ABA CEO Rob Nichols said that his group will be actively lobbying for the bipartisan cannabis banking bill in order to provide clarity to financial institutions that currently worry that taking on marijuana-related clients will put them at risk of federal penalization.

He emphasized the bipartisan nature of the Secure and Fair Enforcement (SAFE) Banking Act, which currently has 206 cosponsors in the House, including 26 Republicans.

“This is legislation that already passed in the House Financial Services Committee early in this calendar year by a huge bipartisan margin, and this is something that I predict…as early as September—probably no later than than October—will pass the full House of Representatives by a bipartisan majority, which is exciting,” he said.

Full story and analysis at 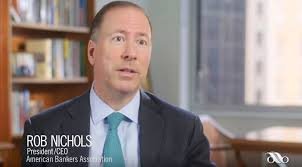