We do wish they’d replace the word Marijuana with  the appellation Cannabis and while they are at it, not spell it Marihuana.

Essentially the concept of full Federal regulation is still being fudged.

Senators Cory Gardner of Colorado and Elizabeth Warren of Massachusetts released a long-awaited bipartisan marijuana legislation reform bill on Thursday that would give states the right to determine the best approach to marijuana within their borders.

It does not seek to legalize marijuana, but instead proposes an amendment to the Controlled Substances Act, protecting people who choose to use marijuana, so long as they comply with local state or tribal laws. The bill also states that compliant marijuana transactions are not considered trafficking, and, finally, removes industrial hemp from the list of substances prohibited under the CSA.

“The federal government is closing its eyes and plugging its ears while 46 states have acted,” Gardner said in a statement. “The bipartisan, commonsense bill ensures the federal government will respect the will of the voters – whether that is legalization or prohibition – and not interfere in any states’ legal marijuana industry.”

As it stands, marijuana is federally illegal, but due to the Rohrabacher-Blumenauer amendment, the Justice Department has virtually no budget to enforce laws that say so. The proposed bill would go a step further by making it illegal, rather than unworkable, for the federal government to interfere in state marijuana industries.

The language in the bill is not radically different from the legislation Warren and Gardner had envisioned when they discussed it back in April.It upholds a number of federal criminal provisions under the Controlled Substances Act, and recommends a few new ones, such as prohibiting sales at transportation facilities and distribution to those under 21, except for medical purposes.

“This is not a bill that forces legalization on any state that doesn’t want it,” Warren said during a press conference with Gardner. “We are trying to take care of business in Massachusetts, in Colorado. We are trying to respect the voters of our states that said this is how we want to do business around marijuana…and we just want the federal government to get out of the way and let them do it.” 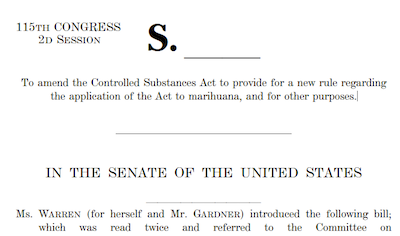