This announcement is certainly raising the chatter levels on SAFE. Might a vote actually happen?

Mj Biz report……A bill that would create a federal safe harbor for financial institutions to serve state-lawful cannabis businesses and ancillary companies will be put to a landmark vote in the U.S. House of Representatives next week, House Majority Leader Steny Hoyer said Friday.

Hoyer, D-Maryland, announced on the House floor that he will schedule the SAFE Banking Act for a vote.

His office sent out an email to lawmakers informing them of the decision.

Mariel Saez, Hoyer’s deputy communications director, wrote in an email to Marijuana Business Daily Friday afternoon that the bill is expected to reach the House floor on Wednesday.

In historic move, US House to vote on cannabis banking bill next week

The Cannabis Trade Federation immediately sent out an alert stating

As we reported last Friday, it looks like we are going to have a historic vote on cannabis policy reform next week! Just hours ago, U.S. House Majority Leader Steny Hoyer (D-MD) circulated a notice to House members. It contained this key sentence:
We will consider several bills under Suspension of the Rules, including H.R. 1595, SAFE Banking Act of 2019, as amended.
Bills considered under Suspension of the Rules are not subject to amendments and require a two-thirds majority to pass. So we have instructed our lobby team to direct its collective energy toward securing as many new ‘Yes’ votes as possible.
Share On Linkedin
Share Via Email 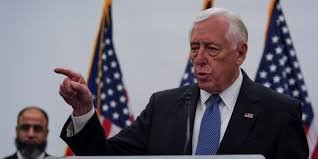