We’re not sure if this is a god or bad thing!

After a Springfield scandal, Mike Noonan left the state to fire up a second career — as a certified connoisseur of fine, organic weed.

NILES, Mich. — For decades, Mike Noonan was the consummate Illinois political insider. He aggressively worked on Democratic campaigns in all sorts of communities and was a big player in the behind-the-scenes jostling over legislation at the state Capitol.

After years as a staffer and top political operative for longtime Democratic boss Michael Madigan, Noonan was a lobbyist with a long roster of clients in Springfield.

But a corruption scandal ended Madigan’s long reign last year. And since then, Noonan has left Illinois entirely.

Last summer, Noonan began what he hopes will be a mellower, second career as an owner of a organic marijuana farm and certified “ganjier” in this small city in southwest Michigan.

Noonan, 54, says he’s done with politics in Illinois and is dedicating himself fully to fighting for “the craft weed revolution” in his new home on the other side of Lake Michigan.

“Life has really transitioned, and all for the better,” Noonan says, wearing a smock in the retail shop of his Southland Farms in Niles, Mich., about 100 miles from Chicago.

Noonan refers to the shop at Southland Farms as a “budtique” — reflecting the business’ aim of providing an upscale experience and “quality weed” for cannabis consumers.

Next to the cash register at the front of the store, Noonan proudly displays the certificate he earned as a ganjier — a certified connoisseur of fine weed. He passed a course in northern California to become one of what are fewer than 200 ganjiers in the world, trained to guide cannabis users much as a sommelier advises wine drinkers.

Although he was not personally implicated in the Illinois corruption scandal, the native of Chicago’s south suburbs says he felt it was the right time for him to leave the political scene.

“Let’s be honest,” he said. “Maybe I wasn’t the best at identifying the people who shouldn’t be in politics, because obviously, I still like and care for plenty of folks who are now seen as scoundrels.”

Noonan said his decision to abandon Springfield for Michigan ran contrary to the conventional wisdom motivating many power players in Illinois. Many of his closest allies in Democratic circles would grind through periods of turmoil by telling themselves, “The key to success in politics is staying in the game,” he said. 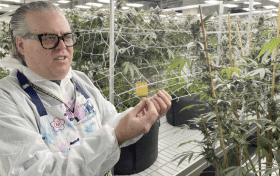