An Evansville man is facing a list of charges for beating a woman, because he didn’t like her appearance.

He did this while she was holding her baby, causing visible injuries.

She says Dunn choked and threatened her with death because he didn’t like how the Christmas presents were wrapped.

He also took her phone so she couldn’t call for help.

During his arrest a bag of magic mushrooms were found in his pocket.

He is lodged in the Vanderburgh County Jail on a $5,000 bond. 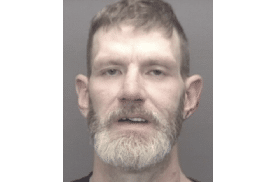