A shipment of cocaine valued at more than J$7 billion (US$50 million) was seized in Kingston on Saturday, in what’s believed to be one of the largest drug busts in Jamaica’s history.

It’s the third major find over the last four months.

The cocaine was found in a container at the Kingston Freeport Terminal Limited, in the Jamaican capital, during a joint operation involving police Narcotics Division, the Jamaica Defence Force and the Jamaica Customs Agency.

The police say the discovery was around 3 a.m.

The container was shipped from Colombia and local law enforcement authorities believe Jamaica was not the final destination for the drugs. 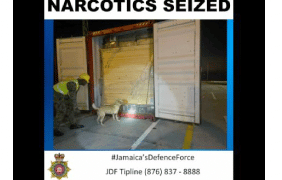