A JERSEY company which was the first in the British Isles to receive a licence to produce cannabidiol is looking for £6 million of investment to fund its expansion plans.

Jersey Hemp, based at Warwick Farm, is hoping that £1 million of the total will be raised through the online crowd funding platform Seedrs, while the remainder will come from private investors.

The new fundraiser comes after the firm received £2 million of investment in 2019 which was used to develop its laboratory, processing, logistics and distribution.

Jersey Hemp would like the next round of funding to be used to accelerate its development and commercialisation.

The firm currently operates on 17 acres of farmland and has access to a further 1,000 hectares owned by third parties should it wish to expand.

Its products, such as CBD oil and hemp protein powder, are being sold through retailers such as Amazon and Selfridges.

Jersey Hemp chief executive David Ryan said: ‘Jersey Hemp has made a huge amount of progress over the last two years following the fundraise, which allowed us to put in place infrastructure and production facilities that are world class.

‘As a leading provider of the highest-quality CBD products, we are in a prime position for immediate commercial expansion as the Food Standards Agency gets set to provide further regulation of the CBD market.’

Bernard Fairman, non-executive chairman of Jersey Hemp, said that he believed the firm was a ‘fantastic investment opportunity’,

‘It has a proven track record of making a premium product that is already being sold by some of the UK’s top retailers,’ he said.

‘Additionally, Jersey Hemp’s emphasis on sustainability will be attractive to the increasing number of consumers who want to ensure that their products do not contribute to damaging the environment.’

Jersey Hemp, which was founded in 2013 by three firefighters, gained its licence to produce CBD oil from its locally grown hemp in August 2019. CBD oil is thought to help ease symptoms of common health issues, including anxiety, depression and heart disease. 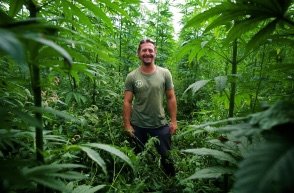