The New Mexico Department of Health must begin issuing medical cannabis cards to qualifying non-residents following a judge’s ruling that upholds an elimination of the program’s residency requirements.

During this year’s 60-day legislative session, lawmakers approved several cannabis-related bills, including one that made substantial changes to the state’s medical cannabis law, called the Lynn and Erin Compassionate Use Act.

“Among these changes was a change to the definition of a qualified patient,” Marissa Novel, chief marketing officer for Ultra Health, one of the state’s licensed vertically integrated cannabis businesses, told Cannabis Business Times. “In the former medical cannabis law, which was originally enacted in 2007, the definition of a qualified patient was a New Mexico resident who has been diagnosed with a debilitating condition. This year, during the legislative session, they struck ‘a New Mexico resident’ and replaced that terminology with ‘a person.’”

This opens New Mexico’s medical cannabis program to any person with one of the state’s 28 qualifying conditions who is certified by a New Mexico practitioner to use cannabis as treatment. Gov. Michelle Lujan Grisham signed the changes into law in April, and Ultra Health looked forward to serving a wider population of patients.

“There’s no mention of residency as a requirement for patients in the law, so we were fully expecting that change to become effective on June 14, … when the entire law became effective,” Novel said.

But not so fast.

When the law took effect, the New Mexico Department of Health, which oversees the state’s medical cannabis program, said it would not issue cards to out-of-state patients. Then the lawsuit landed in Biedscheid’s courtroom.

“Three petitioners, two from Texas and one from Arizona, who all applied for their medical cannabis cards and had been diagnosed with one of [New Mexico’s] 28 qualifying conditions, filed a Writ of Mandamus lawsuit, basically asking the judge to order the Department of Health to perform what’s called an ‘administerial duty’ in issuing medical cannabis cards to the petitioners,” Novel said. “An administerial duty is like issuing a marriage license or a fishing license. There’s shouldn’t be a discretion factor here. It’s just, if you check all the boxes, you should receive a permit, or a medical cannabis card.”

The Department of Health, however, said the point of contention in the new law was a drafting error.

“They said that change wasn’t supposed to be made in the law, but the law stands as it’s written,” Novel said. 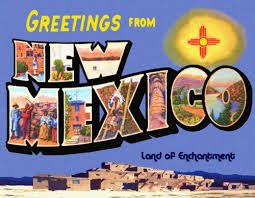