Police went into a room at Hays Medical Center on Dec. 16 and seized a terminally ill patient’s vaping device and some edible paste containing THC. They cited him for drug possession and set a court date for Jan. 2. He’s essentially bedridden and in the final stages of terminal, inoperable cancer. I called the Hays Police Department about it. The dispatcher said she’d have someone call me, but that hasn’t happened yet.

The news of the bust was relayed to me by one of the patient’s friends. I talked with the patient, 69-year-old Greg Bretz, by phone from his hospital room and he described what happened. He said he’s “flat on my back” in his hospital bed and can’t stand up unassisted. He’s been using his vaping device and eating a little bit of the THC paste on bread to relieve his symptoms since he was hospitalized about three weeks ago. He said a doctor told him to do whatever he wants if it makes him feel better, because there’s basically nothing medical science can do for him anymore other than hospice care.

But a hospital staffer caught him vaping and reported him. Police were called and three officers came to his room. He said they told him the vaping device was a fire hazard, because the room is equipped with oxygen. That could be a valid concern. Vape devices have a small electronic element that heats liquid to steam for inhalation, and there have been cases where they malfunctioned and patients got burned using them while taking oxygen through a nasal tube. Bretz said he’s not on oxygen. He said the police were mostly intent on seizing his THC paste, which he argued was medicine, because his vaping liquid contains only a trace of THC, if any. He said he’ll try to contact the prosecutor and see if they’ll push back his court appearance. The one certainty in this sorry episode is that he’s not going to make it there. Typically, when a defendant doesn’t appear, a judge will issue an arrest warrant. If it comes to that, well, Bretz will be easy to find. He’s not going anywhere. 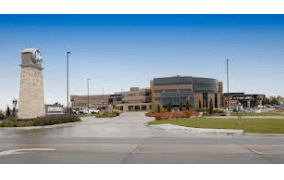