Lesotho has become the first African country to permit the legal cultivation of cannabis – but the production of the drug has been restricted to two foreign-owned companies, while rural farmers and the wider population continue to be prohibited from harvesting their own.

Lesotho is a landlocked country, entirely encircled by South Africa, with a population of a little over two million.

Almost a year ago, on February 28 2017, Lesotho’s Ministry of Health and Social Welfare granted a Prohibited Drug Operator license to the Pharmaceutical Development Company (PDC) Ltd to legally cultivate, supply, hold, import, and export cannabis. This made PDC – which is based in Lesotho’s capital Maseru – the first company in the country, and the entire of the African continent, to be permitted to legally produce the drug. Yet, just months later, PDC’s director resigned and was replaced by US-based businessman Michael Ogburn, and all of PDC’s shares were transferred to Corix Bioscience Inc., a company based in the US state of Arizona.

On February 6 2018, Corix Bioscience Inc. informed its shareholders that it had had a “tremendous quarter”, including acquiring PDC, which has allowed them to attain “the first license issued by the Government of Lesotho that enables them to import and the [sic] export cannabis and cannabis resin in various forms”.

On its website, Corix Bioscience describes itself as “a leading provider of CBD [cannabidiol] used for a wide variety of medicinal purposes”, and it boasts of “manufacturing the best and safest CBD oils in the world”. Alongside the manufacture of CBD, the license for cannabis production that Corix Bioscience Inc. has acquired through its acquisition of PDC allows them to undertake a range of cannabis-related activities that are prohibited in most of the world.

According to the terms of the license (available for download here), license-holders are permitted to “cultivate flowerings of the plant […] for the purpose of smoking, vaporizing, extraction, edible, […] and medicine production” across up to 20,000 square metres of land. The license-holder is permitted to “export, import and transit [cannabis] within, into and outside of Lesotho for medical use and/or scientific use and any other lawful use”. This thereby allows Corix Bioscience Inc. to transport Lesotho-produced cannabis or cannabis-based substances to any jurisdiction in the world that allows the drug for recreational or medical purposes, as long as that jurisdiction permits it. The company claims this to be around 30 countries.

The provision of a cannabis license to PDC/Corix Bioscience Inc., and one to a South African botanical company Verve Dynamics, suggests that Lesotho has taken a ground-breaking step in African drug policy; rolling back prohibition and embracing a regulated approach to cannabis production. However, the reality on the ground is markedly different. 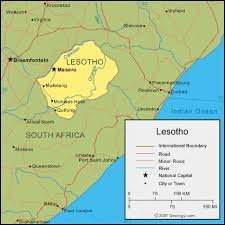