Lithuanian President Gitanas Nausėda says he opposes the idea to decriminalise the possession of small amounts of cannabis in the country.

“I’m opposed to that idea at present because I think we have been failing thus far in our fight against the spread of drugs in schools and among young people who are the future of our state,” Nausėda told LRT RADIO on Friday while answering the public’s questions.

According to the president, it was necessary to stave off the spread of narcotic drugs among the youth before taking any initiatives to decriminalise the possession of such substances.

“I don’t find it convincing when someone says that we’ll liberalise this somewhat and then move to education and various other projects. We reverse the order of things in this place. I think we should educate first and make sure to stop this bad negative trend. And then we could talk about legislative initiatives,” he said.

Earlier in December, the Lithuanian parliament approved a proposal to supplement the Code of Administrative Offences with fines imposed for the possession of small amounts of cannabis but failed to remove this offence from the Criminal Code in a separate vote. 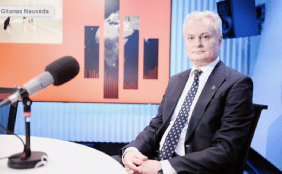