Mexico’s former defense secretary helped a cartel smuggle thousands of kilograms of cocaine, heroin, methamphetamine and marijuana into the United States in exchange for bribes, according to court documents unsealed Friday.

Thousands of intercepted BlackBerry messages show the general ensured military operations were not conducted against the cartel, and that operations were initiated against rivals, according to prosecutors. Cienfuegos allegedly introduced cartel leaders to other corrupt Mexican officials.

Cienfuegos — also known as “El Padrino,” or “The Godfather,” according to the indictment — is accused of alerting cartel leaders to a U.S. law enforcement investigation into its operations and the use of cooperating witnesses and informants, which resulted in the murder of a member of the cartel that leaders incorrectly believed was assisting U.S. law enforcement authorities.

Intercepted communications between Cienfuegos and a senior cartel leader discussed the general’s historical assistance to another drug trafficking organization, as well as communications in which the defendant is identified by name, title and photograph as the Mexican government official assisting the H-2 cartel, authorities said.

Mexico authorities don’t identify any drug cartel as H-2, which, according to U.S. officials, was led by Juan Francisco Patrón Sánchez. Instead, Mexican officials alleged Patrón Sánchez was a regional leader of the Beltrán Leyva drug cartel. He was killed in 2017 in a shootout with Mexican marines. 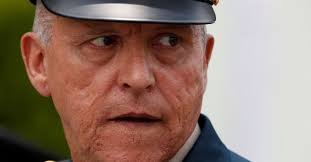