According to the Bureau of Justice Statistics, nearly 80% of people in federal prison and almost 60% of people in state prison for drug offenses are black or Latino.1 As state laws regarding the legality of marijuana have evolved, concerns about equitable opportunity in the industry for people of color have been at the forefront of the conversation.

To address this key issue, many states have implemented forms of social equity programs. Similarly, the Marijuana Regulatory Agency (MRA) has established such a program and is committed to making Michigan the model agency in the country, including being a leader on diversity, equity, and inclusion in the marijuana industry.

The Michigan Regulation and Taxation of Marijuana Act (MRTMA) directed the MRA to create a plan “to promote and encourage participation in the marijuana industry by people from communities that have been disproportionately impacted by marijuana prohibition and enforcement and to positively impact those communities.”

As the MRA implemented and expanded this plan, it became clear that the broad language of the statute was not enough to address the specific issue of racial inequities within the commercial industry. Data collected in December 2020 by the MRA on individuals who have an ownership interest in a licensed adult-use establishment in Michigan showed that only 3.8% are black or African American and 1.5% are Hispanic or Latino.2

Accordingly, the MRA established a Racial Equity Advisory Workgroup as authorized by Section 2(h) of Executive Reorganization Order No. 2019-2, MCL 333.27001(2)(h), composed of state and local officials and industry stakeholders as follows:

Each subcommittee developed and presented proposals to the full workgroup that included the following elements for the implementation of the proposal: 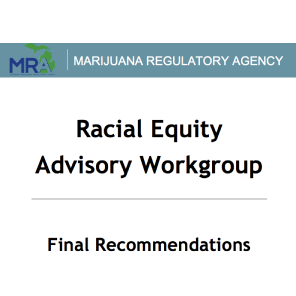