Authorities have tacked on additional allegations and a bill for $3 million to earlier charges that a Champlin man possessed nearly 77,000 vaping cartridges loaded with highly concentrated THC. Reports the MN Star Tribune.

Valentin V. Andonii, 23, is newly charged in Anoka County District Court with possessing a controlled substance without official labeling that the proper tax was paid on the items, the state Department of Revenue announced Monday.

In September, Andonii was charged with two first-degree drug counts, one for trafficking and another for possession. Authorities say it was the largest seizure of its kind in state history.

Andonii was initially held in lieu of $1 million bail and has since been released on bond ahead of a July 2 court date.

Defense attorney Michael Brandt said he found “it ironic that the state is trying to put Mr. Andonii in prison … even though imprisoning him will make the prospect of any payment, shall we say, impossible.”

More broadly, Brandt said, “in 18 states, this type of stuff is legal to possess. If it were legal here [in Minnesota], the state would have its tax revenue” of $3 million that it is seeking to collect from Andonii.

The 76,972 cartridges collectively held more than 185 pounds of the active ingredient in marijuana and were seized on Sept. 23 from a condominium in the 3600 block of Coon Rapids Boulevard with packaging illustrated with younger users in mind. Some sported famous cartoon characters or themes of sweet flavors.

Nearly 29,000 of the cartridges were found in a Cadillac Escalade and 30,000 more in the garage next to the luxury SUV, the criminal complaint said. Authorities also confiscated nearly $145,000 from the residence and another $23,800 in counterfeit currency.

Court records show that Andonii has three convictions for drug-related crimes, two of them felonies. His most recent drug conviction has him on probation until March 2021. 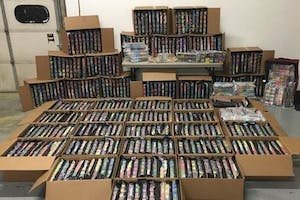