Ohio’s secretary of state has formally resubmitted an activist-led marijuana legalization petition to the legislature, giving lawmakers four months to consider the reform. If they don’t act, advocates could then collect additional signatures to place the issue on the November ballot for voters to decide on.

Secretary of State Frank LaRose (R) sent a letter to legislative leaders on Wednesday, explaining that he is fulfilling his obligation to present the reform initiative to the legislature on the first day of the new session and kicking off the four-month window for lawmakers to take up the measure.

The campaign Coalition to Regulate Marijuana Like Alcohol (CTRMLA) worked strenuously to put the legalization initiative on the November 2022 ballot, but procedural complications prevented that from happening. Activists turned in enough signatures to initiate the legislative review, but the timing of their initial submission was challenged.

CTRMLA’s lawsuit to force ballot placement was unsuccessful with respect to the 2022 election, but the state agreed to a settlement that meant they will not have to collect another round of initial signatures and that the initiative would be immediately retransmitted to the legislature at the start of the 2023 session.

“As stipulated in the Settlement Order, today shall be considered the date on which the German Assembly’s four-month period to consider the proposed law begins, as provided for in Article II, Section 1b of the Ohio Constitution, and no parties shall take any direct or indirect action in contravention of this re-transmission,” the secretary of state wrote to lawmakers. 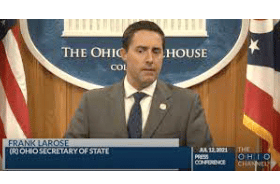