No use to anyone other than a politician looking for votes is our take.

When announcing the marijuana pardon project earlier this year, Gov. Tom Wolf said it had the potential to help thousands of Pennsylvanians clear their records. But it has fallen well short of that goal.

More than 3,500 applications were sent in for the program, aimed at wiping out low-level marijuana convictions in a one-time mass act of clemency. Fewer than 250 people, however, will have an opportunity to clear their record later this month.

On Thursday, the Pennsylvania Board of Pardons voted whether to move forward on more than 2,600 applications from the project. Of those, 231 were approved and will go for a final vote by the board on December 16. Any of the cases that make it through that round, will go on to Wolf to grant the pardon.

Another 2,002 applications were denied Thursday because they did not meet the requirements of the project and 434 were held under advisement, meaning the board can vote on them at a later date.

A spokesperson for Wolf explained that there were a number of cases with multiple applications for people with more than one conviction. The total number of unique people who applied for clemency under the program was just over 2,600.

“The Pennsylvania Marijuana Pardon Project was a first of its kind project with a goal to pardon a large amount of people with select minor, non-violent marijuana criminal convictions since the governor cannot unilaterally issue pardons and the General Assembly has yet to act to legalize adult-use marijuana,” Emily Demsey, deputy press secretary for Wolf, wrote in an email. “It is the hope of Governor Wolf that the next administration will continue working to improve this process and give people with these offenses their rightful clean slates, until marijuana becomes legal in Pennsylvania.”

The program only applied to people who were convicted of possession of a small amount of marijuana and excluded anyone who had any additional criminal convictions on their record. 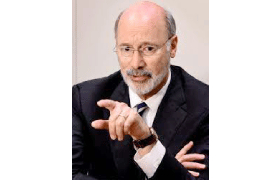