3 This is really something, interesting presenters, well worth the money, and i actually will learn something

Patents and intellectual property are key mechanisms for traditional pharmaceutical companies to make money, though there are a variety of approaches to the patenting process among psychedelic pharmaceutical companies. In this session, Joy Sun Cooper, Frank L. Gerratana, and Rosy Wolfe will discuss the ethics of patenting psychedelic substances, learn about novel applications of patents for psychedelic medicines, and explore how making patents available through the public domain can protect accessibility.

Joy Sun Cooper co-founded and served as Chief Operating Officer of Groups, a venture-backed healthcare services company that is tackling the opioid epidemic in rural America. Groups operates more than 50 outpatient clinics in six states that is pioneering a value-based model for the treatment of opioid use disorder.

Prior to starting Groups, she helped launch GiveDirectly, a global nonprofit that gives cash to the ultra-poor with no strings attached using mobile payments technology and conducts rigorous, experimental evaluation to measure impact. She previously was an engagement manager at McKinsey & Company in the healthcare and agriculture practices and Director of Operations at the Clinton Health Access Initiative (CHAI), where she designed and implemented large-scale HIV treatment programs in Sub-Saharan Africa.

Joy holds an M.B.A. from Stanford University Graduate School of Business and a B.S. in international affairs from Georgetown University School of Foreign Service.

Frank L. Gerratana is a patent attorney in Boston and advises MAPS on a pro bono basis on intellectual property matters. He has also participated in successful and ongoing drug decriminalization efforts at the local and state level in Massachusetts. Outside of work and activism, Frank has been active in the Boston burner community and served on the board of directors of Firefly, the Burning Man regional event for New England.

Rosy Wolfe is a human being whose career has included nonprofit management, writing, and technology education. Her current role is Executive Director at Amateur Radio Digital Communications (ARDC), an organization that got its start managing a large IP address block allocated to amateur packet radio usage. In 2019, the organization sold a quarter of the address space, creating the basis for an ongoing fund aimed to support amateur radio and digital communication science both in the US and internationally. Rosy joined as Executive Director in July 2020 and is managing the establishment of ARDC’s legal and administrative frameworks as the organization transitions from operating as a public benefit corporation to a private foundation.

Prior to ARDC, Rosy (under her former name, Beth Schechter) ran the Open Cannabis Project, a nonprofit dedicated to documenting cannabis genetic data as prior art, helping to prevent overbroad patents from being issued on these historically under-documented plants. She has also written curriculum on HTML, CSS, and Javascipt basics, developed a fellowship program for a renowned mapping and data visualization studio, edited a guidebook for communities in Ghana wishing to exercise land tenure rights, diagrammed how the patent system works with cannabis plants, and supported or managed art, digital, and robotics projects alike – among many other adventures. Rosy holds an M.S. in Digital Media from Georgia Tech, where her work focused on participatory design with foragers and farmers, and a BA in Philosophy from Georgia State University, where she focused on legal theory. 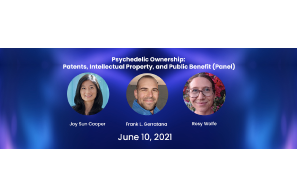