A recent study looking into the effects of medical marijuana versus opioids found that the rate of opioid prescription has significantly gone down in U.S. states where medical marijuana has been legalized. Authors of the study pointed out that substantial evidence has been gathered to conclude decisively that marijuana can relieve pain in patients with lower risk of addiction and almost no risk of overdose. Against the background of the fact that the U.S. at present is battling with an opioid epidemic, the potential for marijuana policies to curb opioids addiction is receiving increased consideration consequently adding impetus to U.S. medical marijuana market. Studies found that in the states that legalized medical marijuana, opioid prescription on an average dropped by 5.9% annually. It was also found that older Americans are most likely to use medical marijuana, notably a group most afflicted by pain conditions that can be alleviated by marijuana. 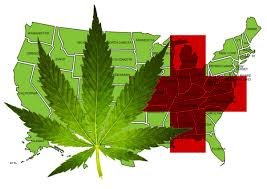