Santa came to town — with 20 pounds of cocaine.

Adderly Santos Familia was caught smuggling bricks of coke in stuffed Santa toys at JFK Airport on Dec. 14 after arriving from Punta Cana, Dominican Republic, according to Homeland Security Investigations.

More powdery drugs were also found in two airplane neck pillows and the lining of his baggage during a Customs and Border Protection screening, court filings said.

Familia, who lives in Queens told authorities he had been visiting family in the Dominican Republic. The Feds found nearly nine kilos of cocaine in his belongings, according to court filings.

Prosecutors included a photo of the small plush Santas, with a mixture of stuffing and cocaine packets torn out of them. 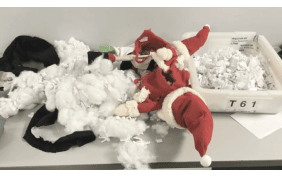