Two years of trials in the Riverland and South East of nine different varieties has demonstrated the industrial hemp industry’s potential in South Australia, according to a State Government report released today.

Minister for Primary Industries and Regional Development Tim Whetstone said the trials have demonstrated a number of factors for licenced growers to consider when planting industrial hemp.

“The results of two years of trialling nine varieties are positive and will support ongoing investment in the burgeoning industrial hemp industry,” said Minister Whetstone.

“These trials have shown under the right conditions, including planting in free-draining soil and using good quality irrigation water, there was good germination and growth at the trial sites. There were challenges at the Kybybolite trial site in the 2017/18 trials primarily due to the salinity of the groundwater, so the trial was moved to Maauope for the 2018/19 trials.

“With free draining soil and high-density plantings, the results showed industrial hemp varieties performed successfully during the October to January period, particularly in the hot summer heat of the Riverland where the plants reached more than three metres high.

“The first commercial industrial hemp harvest in South Australia occurred during the 2018-19 growing season and the growing industry is anticipated to have a farmgate value of $3 million annually within five years.

“Current and potential growers are looking to order seed for the 2019-20 season and this information will also assist them with planning their growing schedule.”

“Some of the varieties were dropped during this latest round of trials based on the initial results, in favour of other varieties that were believed to be more suited to South Australian conditions,” said Minister Whetstone.

“The results not only look at growing rates but also assess the grain and fibre yield as to its suitability for a range of uses. To date the State Government have approved 13 cultivation licences and two processing licences for industrial hemp in South Australia.”

The research trials are a collaboration between SARDI, the University of Adelaide and the CSIRO. A third round of trials for six varieties is set to commence at Loxton and Maaoupe.

Industrial hemp is produced from cannabis plants with low tetrahydrocannabinol (THC) content – less than one per cent – in the leaves, flowers and stems. 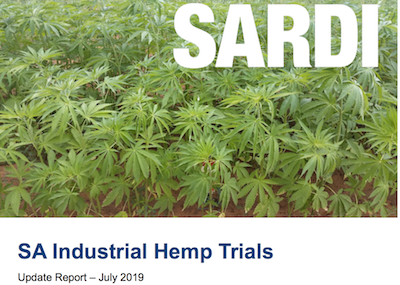