Chiang Mai News reports….Police in Chiang Mai armed with an arrest warrant detained a husband and wife for the illegal production and distribution of cannabis oil online.

Cash in the sum of 3.4 million baht was found at their home.

The arrests followed complaints from the family of a cancer patient who took the oil but died.

They found 30 boxes of cannabis oil, bank books, house registration documents and 3.4 million baht in 1000 baht notes. It was all taken in as evidence and the couple were charged with possessing and distributing the oil online under laws relating to Class 5 drugs.

The raid resulted from a complaint from the family of a 39 leukemia sufferer who bought the oil and died soon after.

Doctors said she had succumbed to an infection of the vocal chords.

The wife in the case said that they had bought oil from Laos which they then mixed in Thailand and sold online for 1,000 baht a bottle.

Tests are now underway to see the exact composition of the oil and whether the couple might be charged in connection with the cancer patient’s death.

Wichunee said that she qualified with a bachelor’s degree in business and started by selling bags to protect fruit from insects and then sold agricultural equipment.

But after trying cannabis oil herself and being convinced of its health benefits she decided to start that business.

She claimed that many of her customers felt better and one cancer sufferer who had been given 2 months to live lasted two years after taking her oil. 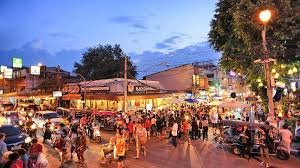