Tilray Inc. has signed its first agreement to supply a European Union country with cannabis from its recently opened facility in Portugal, the company announced early Wednesday morning.

The freshly inked contract with Cannamedical Pharma GmbH to export $3.3 million worth of cannabis to medical patients in Germany gives TilrayTLRY, -0.32%  access to a country with a population and gross domestic product that are twice the size of its home country, Canada. The deal also marks another step for Tilray and its global ambitions, Chief Executive Brendan Kennedy said in a telephone interview.

“Back in September of 2015, I set out in search of a license to cultivate, process, package and distribute medical cannabis somewhere outside of Canada. We were the first Canadian [licensed producer] to have a license somewhere else in the world, and that was in Portugal, [which] issued their first THC cannabis cultivation license. And over the course of the last two years we have built out cultivation, the processing space, the manufacturing space in Portugal.”

Tilray’s Portugal operation began harvesting marijuana in March and celebrated an official opening in April. The facility is roughly 2.5 million square feet that includes both cultivation and processing operations.

Kennedy said that the framework for Germany would likely be replicated across the European Union and he expects 14 additional countries to put together medical cannabis regulations. He said France is likely to pass a medical pot law in the next six to 12 months.

“It doesn’t make sense, to you know, for a patient in Germany and France to have access to medical cannabis and a patient in Spain not to have access,” he said. “And so you’ll start to see modularity across all the member states.”

Globally, Kennedy says that he expects four countries to legalize pot for adult recreational use in the near future: Luxembourg, Portugal, Mexico and New Zealand.

Kennedy said Tilray expects to recognize the revenue from the Germany deal in the third quarter but it could be pushed to the fourth, depending on logistics, and he said the company would update investors when it ships the pot. 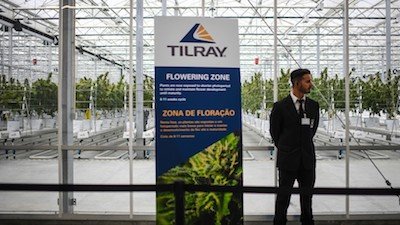