AN Ellesmere Port woman caught posting cannabis to her friend has been fined at Chester Magistrates Court.

Joy Etheridge, 73, of Vale Road, Whitby, pleaded guilty at the earliest opportunity to possessing small quantities of cannabis and cannabis resin with intent to supply, when she appeared at Chester Magistrates Court on Friday, December 30.

Prosecuting, Michael O’Kane said it was on June 16, 2021 when Etheridge used the Post Office in Wellington Road to post six parcels.

Staff at the Post Office branch noticed one of the parcels had a smell of cannabis and reported it to police.

Police discovered cannabis and cannabis resin in one of the packages.

In police interview, Etheridge said she had been selling clothing through eBay, and denied sending cannabis in a parcel.

Etheridge had received a police caution in 2018 for posting cannabis, but had no previous convictions.

Defending, Chris Hunt said Etheridge, who had been a youth worker all her life, latterly in the local area, had known her friend for many years.

It was during lockdown when her friend was struggling with medical issues and the two, who had been communicating online, were unable to meet up due to restrictions.

Mr Hunt said “in the spirit of kindness”, with Etheridge and her friend having smoked cannabis years ago, decided to get a small amount of cannabis “as a treat” to send to her friend in the post, to help manage her pain.

He added Etheridge now had the “stigma” of a criminal conviction.

Magistrates fined Etheridge £80, plus £120 court costs and a £34 victim surcharge.

The cannabis and cannabis resin were to be forfeited and destroyed. 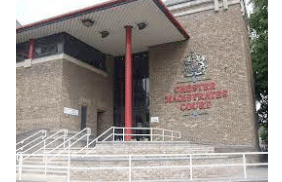