The van was pursued from Lincoln to Newark.

‘Twas the day before Christmas, nothing was stirring, not even a mouse.

‘Until Team 2 spotted this van.

‘The massive bullseye on the windscreen caught the officers’ interest.

‘The van was followed into Lincolnshire from Newark.

Rota 3 response officers came to help just in the nick of time as the van then failed to stop for officers and a pursuit commenced.

‘The van went off the road into a field and the driver was detained after he fell into a ditch.

‘The van was prohibited due to the smashed windscreen.

‘The driver wasn’t insured, in the back 12 cannabis plants were located. The driver was arrested for a number of offences and inquiries continue.

‘To quote our favourite Christmas film “Welcome to the party pal”

‘The driver has been placed on the naughty list and got to see Christmas in, in his very own room with no chimney.’

Van loaded with cannabis ends up in ditch after pursuit 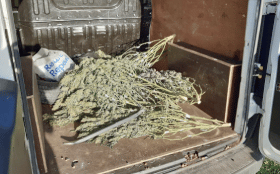