McALLEN, Texas (Border Report) — A former U.S. Border Patrol agent must serve 10 years in prison for his part in a drug smuggling scheme through a South Texas checkpoint.

Peña pleaded guilty on Dec. 17, 2021, to attempting to aid and abet smuggling cocaine through the Falfurrias checkpoint, according to U.S. Attorney Alamdar Hamdani.

During a hearing, Peña told the court that he had been in possession of an AR-15 rifle for use to hunt hogs, but prosecutors said it was brandished while meeting with co-defendant Edwin Alejandro Castillo in planning “the smuggling of a second load of cocaine through the Falfurrias BP checkpoint,” according to a news release.

In handing down the sentence, Crane found his explanation “unconvincing and assessed a sentencing enhancement for possession of a firearm during drug trafficking,” the news release says.

At the time of his plea, Peña admitted that twice he helped smuggle over five kilograms of cocaine through the Falfurrias checkpoint using the information he had as a Border Patrol agent to direct loads through particular checkpoint lanes. The Justice Department says he also acted as a scout and provided information about the inspection lanes and which ones to use. He also gave detailed instructions on how to conceal drugs and distract canine units. 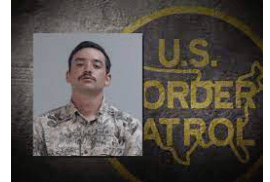