During an appearance on KSL Newsradio’s “Dave & Dujanovic” Tuesday morning, Rawlings said he was asked by the Davis County Health Department to provide legal advice on the measure. He explained his advice to the department was based on the fact that federal law overrides state law.

Rawlings added while there has been an essential moratorium on federal prosecutions for medical marijuana, there’s no guarantee that will always be the case in the future. Therefore, the local department could be federally prosecuted, and that would beyond the control of the Davis County Attorney’s Office.

“It’s really a simple call for us. The United States Constitution has a supremacy clause. The supremacy clause says: In a situation where there’s a conflict of laws on the same issue, the federal law is going to be the one that prevails. It supersedes,” Rawling said on the show. “What we had to tell our health department is here’s your choice: You comply with the state statute and do what’s mandated under the state statute. We cannot promise you won’t be prosecuted by the Department of Justice, by the United States’ Attorney’s Office … Bottom line, the fundamental issue here is it’s a violation of federal law to do it, and that’s what we told our health department.”

Gill said the Salt Lake County Attorney’s Office noticed a problem as the design for the program came together. He said he has voiced his concern with Senate Majority Leader Evan Vickers, R-Cedar City, who sponsored the state bill, and other county district attorneys across the state.

“As the law was created, it created a disproportionate shifting of liability to the county in violation of federal law,” Gill said. “I was very deeply concerned about advising a client to knowingly and intentionally violate what would be federal law. That was one concern. The second concern was that, as the ethical responsibility of us as legal counsel we can’t legally or intentionally tell a client to violate the law.” 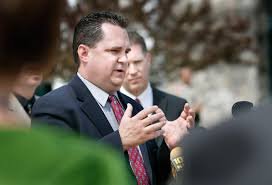