The American Cannabis Nurses Association’s Board of Directors is pleased to announce that the Policy and Government Affairs (PG&A) committee has released a position statement on workplace drug testing for nurses. As more and more nurses experience health conditions, they deserve to have a choice in how they treat their conditions. The purpose of the statement is to call for elimination of pre-employment and random drug testing for nurses and instead use a reliable test for impairment while on the job.

The Chair of the PG&A committee Michael Rochlin stated “It is clear that the war on drugs’ punitive measures such as mandatory cannabis drug testing, can impact critical availability of nurses, especially now during this pandemic.”

“Testing for cannabinoids, especially THC, is not a reliable test for impairment and there is no evidence to support that testing improves workplace performance or decrease workplace accidents,” states Eloise Theisen, ACNA President.

ACNA recognized that many nurses will be looking to cannabis as an option for symptoms such as chronic pain, anxiety and insomnia as the evidence emerges to support cannabinoids for those symptoms. Michael Rochlin also noted that “Drug-testing for cannabis is discriminatory and does not ensure safety.”

Eloise Theisen goes on to say. “As more and more states move towards legalizing medical and adult use cannabis, employers will need to start reviewing the evidence and make policy changes that are based on evidence and not fear.”

ACNA’s full position statement can be found at its website at: https://www.cannabisnurses.org/acna-position-statements. 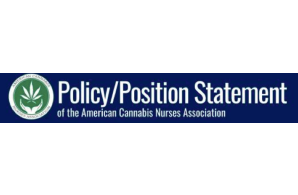