GOVERNMENT has regularised the growing, processing and supply of industrial hemp (Cannabis) by farmers across the country for industrial purposes.

Industrial hemp is from the plant species Cannabis sativa and has been used worldwide to produce a variety of industrial and consumer products.

The revelations, which are contained in the Government Gazette published yesterday, come after Justice, Legal and Parliamentary Affairs Minister Ziyambi Ziyambi consulted Health and Child Care Minister Dr Obadiah Moyo, in terms of the Criminal Law (Codification and Reform Act.

“These regulations may be cited as the Criminal Law Codification and Reform (Persons who may lawfully possess, deal in or use industrial hemp) Regulations, 2019.

“In these regulations — “industrial hemp” means the plant cannabis sativa L. and any part of that plant including the seeds thereof and all derivatives, extracts, cannabinoids, isomers, acids, salts, and salts of isomers, whether growing or not with a delat-9 tetrathydrocannabinol concentration of not more than 0,3 percent on a dry weight basis,” read the regulations

Government said the prescribed persons shall cultivate industrial hemp for industrial purposes on farms approved by the Minister.

In April last year, Government legalised the production of cannabis (mbanje or dagga) for medicinal or scientific purposes.

This was announced by the then Health and Child Care Minister Dr David Parirenyatwa in a Government Gazette under Statutory Instrument 62 of 2018 (Dangerous Drugs — Production of Cannabis for Medicinal and Scientific Use Regulations).

Producers of mbanje must be licensed by the minister.

“An application for the issue of a licence in terms of section 27 of the Act shall be made to the Minister, in duplicate and shall be accompanied by the appropriate fee and three copies of a plan of the site proposed to be licensed which shall comply with the requirement specified in these regulations.

“In case of an individual, proof of citizenship or proof of being ordinarily resident in Zimbabwe or proof of an exemption by the Minister (will be required),” reads the regulations.

The application for the licence must also provide a detailed description of the method that the applicant proposes to use for keeping records.

The minister has powers to audit the activities of the licensed producer with respect to cannabis. 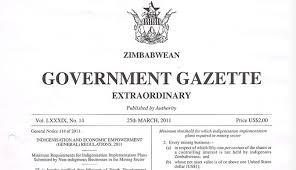