The company said it was unable to secure investment due to the pandemic which has slowed down business and caused significant declines in stock markets around the world.

The retrenchments are with effect from 31 March 2020. MG Health’s chief executive officer, Andre Bothma, communicated the decision to the retrenched workers this week.

“Following the unprecedented spread of COVID-19, the stock market took an unforeseen fall on the 9th of March 2020 and the capital raise that MG Health Ltd was in the process of came to an abrupt halt,” Mr Bothma states in the letter.

“The closing date for the capital raise was 31 March 2020 but due to the COVID-19 pandemic, the lockdown of many countries and stock market fall, investors have withdrawn their commitments. As a result, MG Health Ltd now finds itself in a poor cash flow position. It is for this reason that we regret to inform you that your employment with MG Health Limited has been terminated with effect from the 31st day of March 2020.

“The selection criteria (for the retrenchment) that has been used was agreed between the company and your representative and it was fair and objective. In the event that there is a vacancy of the position that you qualify for within a period of one year commencing from May 2020 to April 2021, the company will give you preference.”

The company also undertook to pay the retrenched workers what it calls a notice pay, a severance pay and compensation for leave days not taken. It also undertook to foot bills for the medical examinations of all retrenched workers to be used in the event of the former employees claiming compensation from the company for medical conditions that could have arisen as a result of their employment.

MG Health was licensed in 2016 to cultivate and process medical cannabis and hemp for export.

According to its website, MG Health’s “cultivation and state-of-the-art processing facilities are based 2000 metres above sea-level” in Marakabei “where clean air and a pristine environment contribute towards the growth of high quality, pesticide-free cannabis products”.

“Our young company has already had a significant social impact on the local community and has the potential of creating inter-generational wealth for many families.  MG Health will be a catalyst for lifting many out of poverty through the creation of new jobs and other wealth creation initiatives,” the company states on its website.

But the company’s aims of ending poverty through job creation risk being derailed after the latest retrenchments and the 17 September 2019 dismissals of workers who had gone on what the company described as an illegal strike. The workers went on strike to protest the company’s alleged failure to address their demands for better working conditions. They have since petitioned the Labour Court to nullify their dismissals.

Yesterday, MG Health’s marketing and communications officer Mpho Sefali confirmed the retrenchments in a statement to the Lesotho Times.

“MG Health Limited (formerly Medigrow Lesotho Ltd) a licensed medical cannabis cultivator and manufacturer of cannabis derived products such as Cann9, Cann9 Livertonic, C+BD, S.NCE and Apex has announced that, due to the unprecedented spread of COVID-19 and the subsequent stock market fall, the company found itself in the same financial position as many other companies around the globe and had to make urgent cost cutting measures to ensure its survival over the next year.

“The company initiated a joint problem-solving exercise with its employees in an attempt to bolster its financial viability. This resulted in MG Health’s initial plans for rapid expansion immediately being halted, considerable cuts on operational expenses and the unfortunate retrenchment of 72 staff members, remaining with 271,” Ms Sefali said.

The retrenchment of the 72 workers represents a huge reduction of the company’s workforce considering that another 24 workers were fired for going on strike in September 2019. This all means the company has lost about a third of its original workforce.

The beleaguered firm is also locked in a dispute with Marakabei villagers who are accusing it of paying them as little as M84 per month each for land the company leased to set up its production facilities.

Villagers employed by the company allege MG Health had reneged on promises to pay them at least M4000 each per month.

The locals say the below market compensation rates for their land and the woefully inadequate wages have left them worse off than they were when they used their land to grow their own crops.

MG Health acquired about 66 land parcels from individual landholders to set up its multi-million investment in the Marakabei area. The leases are for 20 years.

In exchange for leasing their land to the company, the landholders get an annual compensation depending on the size of their plots. However, the villagers who initially agreed to the compensation rates have performed an about-turn and are now claiming that the company pays them M0, 82 per square metre of land and this is not enough. 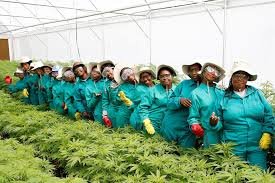