Incoming Senate Banking Committee Chairman Sen. Pat Toomey (R-PA) says that  he is open to supporting legislation that would provide cannabis businesses with access to banking services, according to a  report in Politico.

“I am sympathetic to the idea that people who are involved in [the] cannabis industry—in an entirely legal fashion, in the state in which they operate—ought to be able to have ordinary banking services,” Toomey said. “That’s my starting point, and then there’s a lot of details to work out, but I am open to that.”

Here’s what Toomey says about himself on his website

Senator Pat Toomey joined the U.S. Senate from Pennsylvania in 2011 on a platform of economic and job growth, restoring fiscal responsibility, and creating stronger, safer communities.

Sought out by his colleagues for his views on financial reform and budgetary issues, Senator Toomey was labeled by the Philadelphia Inquirer as “a leading voice on money matters.”

During his time in the Senate, Senator Toomey has successfully led efforts to cut taxes for families, make our business tax code more competitive, end wasteful federal spending, and protect children from abusers.

The senator serves on the Senate’s Banking, Budget, and Finance committees.

Senator Toomey previously served in the U.S. House of Representatives for six years. Honoring his pledge to limit himself to three terms, he did not seek re-election to the House in 2004.

In addition to his public service, the senator has also worked in the financial services industry, served as president of the Club for Growth, and owned and operated a small restaurant chain in the Lehigh Valley with his brothers.

A graduate of Harvard University, he lives in the Lehigh Valley with his wife, Kris, and their three children.

Subcommittee on Taxation and IRS Oversight

Subcommittee on Securities, Insurance and Investment

He told Thomson Reuters in October

“It is my hope that I’ll be the chairman of the Senate Banking Committee, because I am hopeful and cautiously optimistic that my Republican colleagues will prevail in a number of tough races and we will be in the majority, and I hope to be serving these last two years with president Donald Trump having been reelected,” Toomey said during the news conference.

He said he would prioritize ending the conservatorship status of Fannie Mae and Freddie Mac. He also said he would, as chair, “like us to be able to expand opportunities for middle income Americans to be investors at lower costs with more opportunities to benefit from a generally growing economy.”

“There’s very exciting things happening in technology, fintech, payment systems, the possibility of a digital currency, all of these things are really important and exciting changes, and they are going to require some new legislation, some new regulation, and all of those are things I look forward to working on these next two years,” Toomey said.

Sen. Sherrod Brown of Ohio is the current ranking member of the Senate Banking Committee, and is expected to take over as chairman should Democrats take the Senate. Brown on October 7 told reporters that, as chairman, he would first focus on emergency rental assistance in an effort to prevent widespread evictions during the COVID-19 pandemic, according to cleveland.com. 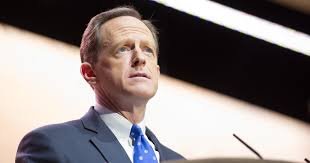