Virginia is considered one of the more cannabis-friendly states, being one of the first states to decriminalize the use and possession of marijuana in 2021. A year later, the Virginia Cannabis Law continues to evolve with the approval of more lenient terms for medical cannabis use.

Cannabis laws vary from state to state, but accredited marijuana physicians are vital to validating citizens qualified to access products. As with the other states, one has to seek an appointment with Virginia cannabis doctors as part of the state application process for medical marijuana use.

In spite of having more lenient regulations than other states, some restrictions remain in the Commonwealth. Learn the basics of Virginia’s state weed laws to avoid potential legal tussles.

As early as 2017, the Commonwealth legalized the purchase of cannabis derivatives such as cannabidiol, CBD, and tetrahydrocannabinol (THC) to epileptic patients. Easier access to these products was expanded to individuals with other life-limiting health conditions. Eventually, cannabis use in adults over 21 years old was legalized.

In July 2022, some amendments to Virginia Cannabis Laws were approved, making marijuana access easier. Below are the two most significant revisions:

Virginia Governor Glenn Youngkin approved the legislation increasing personal and public possession of over four ounces of marijuana. If you’re caught keeping more than this volume but less than one pound, a misdemeanor case will be filed against you, alongside a penalty fee of USD$500. Second-time offenders will face a more stringent punishment; six-month jail time or / and a fine of USD$ 1,000. Meanwhile, possession of over one pound can lead to 10 years of imprisonment and a penalty of USD$ 250,000.

In the past, patients and their primary caregivers had to apply for a medical marijuana identification card subject to state screening and validation. Virginia used to require patients to register with the Board of Pharmacy as part of the process. Processing time can take weeks to over a month in most territories.

With the recent development, patients can purchase medical cannabis without waiting for weeks, as the state made the Pharmacy board registration voluntary. Hence, instead of a medical marijuana card, patients with eligible health conditions will only need to show a state-identification card and their accredited physician’s certification to purchase products from dispensaries.

Based on Virginia’s SB 772, the local Pharmacy Board processes around 40,000 registrations and renewals annually and has around 8,000 applications waiting for approval.

Legal Possession And Consumption Per Legislation

In a nutshell, how can you avoid persecution for marijuana possession in Virginia? Follow these state-approved rules: 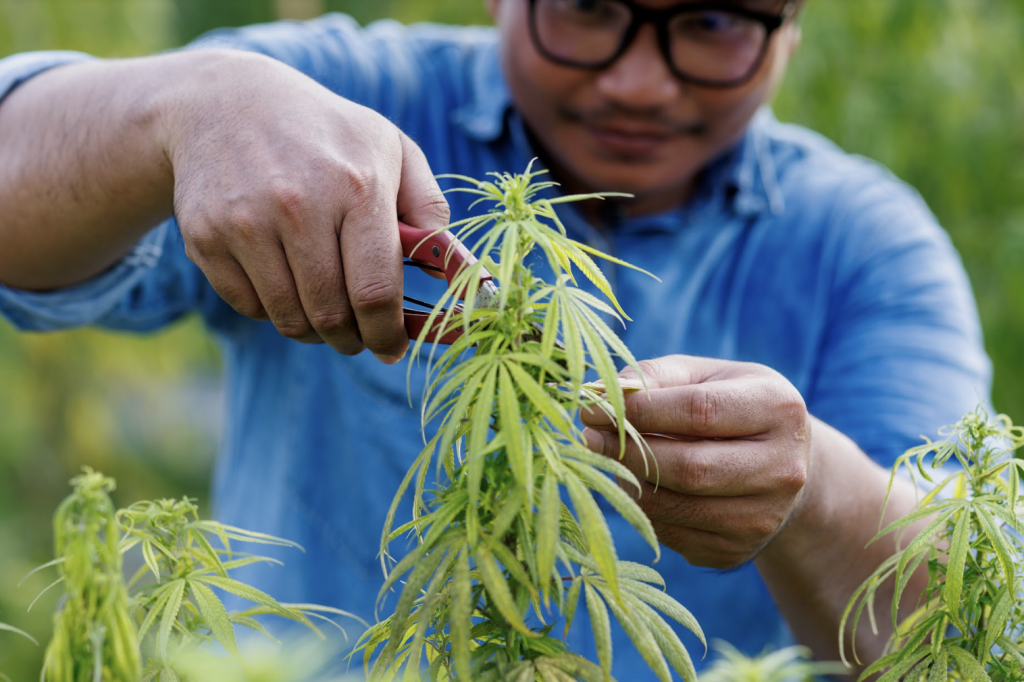 Which Acts Are Considered Illegal?

It’s unlawful to possess and cultivate with the intent to sell and distribute in Virginia, making the rules on the cannabis trade still restrictive, like in most states. Weed possession and consumption are illegal for individuals under 21 years old and those visiting school premises. Using it when driving a vehicle for personal or public use is likewise considered a criminal offense as well as weed consumption and sharing in public locations. When transporting marijuana products, the item must be adequately sealed and away from the driver’s reach.

In addition, it’s unlawful to sell or distribute cannabis seeds, flowers, young plants, or any of the plant’s parts in this state. Transporting or importing marijuana from other states is also considered illegal, including ordering seeds online.

It’s also against the law to possess certain types of paraphernalia used to inhale or ingest weed. These forbidden materials include pipes, tubes, smoking masks, mini-spoons, vials, and bongs.

Virginia’s Cannabis Law allows for non-commercial sharing of marijuana products among eligible persons. Adult sharing refers to transferring less than an ounce of weed without the money involved and was approved in July 2021.

However, this act must be among individuals over 21 years old and must be done only in private. Besides being illegal to trade weed for cash, exchanging these products for other services or goods is also strictly prohibited. That being said, it’s unlawful to sell home-cultivated marijuana to others.

Cannabis products must be purchased exclusively from state-accredited dispensaries. Botanical marijuana or other similar products sold by Virginia medical dispensaries can be had for up to four ounces every 30 days. Meanwhile, a three-month supply of different cannabis products prescribed by a certified medical practitioner is allowed.

Marijuana is still prohibited according to federal laws, though some states are more friendly than others regarding its access, use, and possession. Virginia state is among the territories with less stringent cannabis laws, though restrictions are still enforced. Violators of these regulations may face jail time, hefty penalty fees, or both if found liable.

Thus, eligible marijuana users must know the basic cannabis laws applicable in their locations to eliminate these risks and enjoy the perceived health benefits of marijuana.