We’d suggest playing exactly the same game we have for the last nigh on 100 years doesn’t appear to have gotten us anywhere either.

If the AFP think that demand for “illegal” drugs will dry up let’s be honest he’s in fantasyland.

The Australian federal police commissioner, Reece Kershaw, will use a speech on Wednesday to declare decriminalising drug use “will not stop organised crime” because the revenue stream from the trade will continue to fund criminal activities.

Kershaw is expected to use an address to the National Press Club to toughen language around illicit drug use.

According to an extract of the speech, Kershaw will argue Australia has “made great strides in healthier living – more exercise, drinking less, being sun smart and giving up tobacco – yet too many are ignoring the damage that illicit drugs do to our bodies and our minds”.

“Making these drugs lawful will not stop organised crime – it will likely embolden them, make them richer and enable them to buy more guns and pay for more murders.”

The police commissioner’s address on Wednesday is expected to focus on organised crime and future options for combatting transnational serious organised crime in the wake of Operation Ironside.

The AFP confirmed in June that more than 224 people had been charged with criminal offences, 104 firearms and weapons had been seized with almost $45m in cash courtesy of the three-year covert investigation, Operation Ironside – badged “historic” by the Morrison government.

To achieve the arrests in Australia and globally, the Federal Bureau of Investigation and the AFP used an encrypted messaging service to monitor the communication of organised criminals.

In the wake of Operation Ironside, Palmer noted that global police stings were important, but they were unlikely to lead to significant declines in drug use.

Palmer told The Australian earlier this month: “The end result is, you’re no doubt aware, demand hasn’t gone down, price has hardly moved. Despite saying we’ve completely disrupted and corrupted the heroin market in Australia, I don’t think the signs are that we have.”

As well as law enforcement, it was important to focus on rehabilitation and harm minimisation strategies. Palmer said if conventional, tough on crime approaches were not turning the tide “why don’t we try something else that might?”.

But Kershaw will argue on Wednesday the illicit drug trade creates a revenue stream for criminals, and causes harm to people and to the environment.

“So-called party drugs are made with so many corrosive chemicals that in the countries they are made the Earth is left scorched and local waterways poisoned,” the federal police commissioner will say.

“Trees and plants are felled to extract precursors such as safrole for MDMA production or ephedrine for methamphetamine production. Waste materials used to make drugs are burned to conceal illegal activity, creating extra pollutants.” 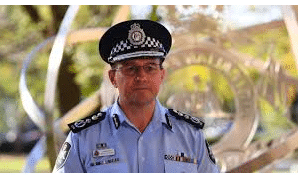