After what he described as an ‘incredible adventure,’ White said the therapy brought emotional and physical relief that’s proven stunning and still tangible six days later

The New Year’s Day session at a southeast Calgary home is also the first such federally sanctioned intervention with the still-illicit active ingredient — psilocybin — in Alberta, said the therapy facilitator.

But for White, who’s battling terminal bladder cancer, and his wife, Rebecca, that dose of magic mushrooms sweetened with chocolate chiefly represents an abrupt lightening of a physical and emotional burden.

“I was in a dark place, I’d been diagnosed with Stage 4 cancer at the beginning of COVID-19, I’m tired, I’m upset and I’m tired of being isolated,” said the 46-year-old Airdrie man, who’s been undergoing immuno and radiation therapy.

“I’d worked myself into this horrible hole with Rebecca.”

Picking up on considerable research into the therapeutic properties of psilocybin, Calgarian David Harder sought to convince Health Canada of its merits, mainly in the mental-health sphere.

Read the rest of the interview at  https://calgaryherald.com/news/local-news/airdrie-cancer-patient-first-albertan-to-undergo-legal-magic-mushroom-therapy 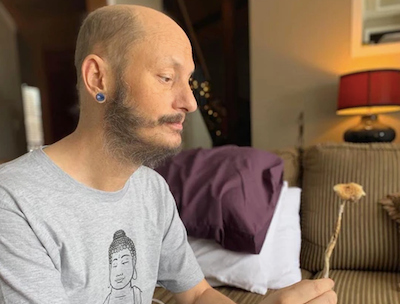