Some people probably shouldn’t use psychedelics.

An Anchorage man allegedly using an Instagram account to sell hallucinogenic mushrooms was found in possession of swastika-emblazoned stickers similar to those pasted on a Jewish museum and a prominent gay bar in the city last summer.

Luke Edward Foster, 27, faces federal drug dealing and weapons charges. The stickers, along with a black-and-white swastika flag, were allegedly found in Foster’s possession, but are so far not part of the criminal allegations against him.

According to a charging document filed in federal court in November, Foster was the Instagram user behind an account called “FrostyFungi,” which posted pictures of psilocybin mushrooms and their production but claimed none were for sale.

As it turned out, the mushrooms were for sale, according to the charges.

Here’s what federal investigators say in the charging document:

It was in early November that an undercover investigator contacted the Instagram account about buying a sticker with the FrostyFungi logo. The account user suggested meeting in an Anchorage Walmart parking lot.

The investigator met Foster in the parking lot, where he saw Foster with a Glock handgun sitting on his lap. The investigator gave Foster $20, and Foster said he had something for him.

In a later meeting, the investigator bought more mushrooms from Foster, and the two discussed growing techniques, as well as firearms. At one point, Foster described spending his Permanent Fund dividend on a 3D printer that he planned to use to print guns. Before they parted, Foster told the investigator he was going home to make a “Tannerite-stuffed dog.”

Tannerite is a compound used, in some cases, to make targets that explode when hit by a bullet. As the charges explain, discussions among online subcultures have included the idea of stuffing Tannerite into toy dogs, “as a solution to a perceived problem of police officers killing pet dogs during enforcement actions. The discussion(s) theorize that a police officer will shoot the stuffed dog, causing the Tannerite to explode, injuring, maiming, or killing the officers nearby.”

About two weeks after that encounter, federal agents were executing search warrants on Foster’s home, vehicle and person. That’s when they allegedly found more psilocybin mushrooms, dozens of capsules, some LSD and multiple firearms, including one that appeared to be equipped with a silencer.

The agents also found a one-wheeled scooter with yellow trim, a black flag with a white swastika on it, as well as the swastika stickers, which read, “We are everywhere.”

Since last May, Anchorage police have been on the lookout for a suspect who put stickers like those allegedly found in Foster’s possession on the Anchorage Jewish Museum, as well as Mad Myrna’s, a gay bar in downtown Anchorage.

A rabbi at the museum said surveillance video showed a tall, thin man wearing a hood and mask pasting the stickers, having arrived and left on a one-wheel scooter.

At the time, the FBI said it was investigating the case alongside police as a potential civil rights crime.

The federal drug and gun charges don’t say anything else about the stickers or flag, and a federal prosecutor assigned to the case declined to comment Thursday. 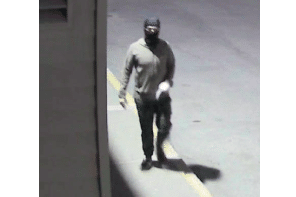