Ganjapreneur report…….Anonymous gardeners have planted more than 30 cannabis plants in the Vermont Statehouse official gardens. Police say the plants will be removed but they will not pursue a criminal case.

34 cannabis plants were planted in the flower beds of the Vermont Statehouse in Montpelier, according to local media reports. It’s unclear whether the plants were hemp or of the THC-rich variety as the plants were too immature to differentiate. 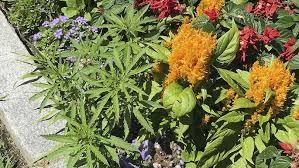