ST JOHN’S, Antigua (CMC) — The Antigua and Barbuda government says it hopes to be able to pass legislation that would allow for marijuana to be grown under control conditions or with licences and to be processed like any pharmaceutical in a laboratory that adheres to high standards.

A statement issued after the Cabinet meeting, said that the newly-elected government of Prime Minister Gaston Browne had invited several officials and experts to participate in the deliberations “in order to achieve the most in decision-making”.

The statement noted that a four-person group, including three Canadian, with an interest in producing medical cannabis, “came to Cabinet in order to advise on the kinds of steps required by the Government of Antigua and Barbuda in order to make possible the growing, harvesting, processing and sale of medical cannabis in its many forms”.

The statement said that the government hopes to be able to pass the laws that would allow cannabis to be grown under control conditions and sold in a domestic market, having been transformed into a variety of medicinal products.

“The Cabinet agreed that Canada’s laws are the best fit to be a model, although Britain, Germany, Switzerland and Brazil are pursuing the same path for growers of the cannabis plants.

“The Cabinet learned that the laws of Jamaica have been adapted to achieve similar ends, but the process has proven to be very unwieldy for producers seeking licenses. Canada, the second largest state in geographic size on the planet, has federal laws that make the growing, harvesting and processing of medical cannabis uniform throughout its many Provinces,” the statement noted.

It said that in February, Parliament legalised the possession of 15 grams of cannabis for personal use, and allows each household to grow four plants in order to take the criminal element out of cannabis production.

“The use of marijuana is now socially acceptable. It is, in essence, a part of the culture of the country. I want to make it abundantly clear that my government is not advocating the use of cannabis; we are against anything that is smoked.

“We do accept, though, on the other hand, that marijuana utilised in different forms has significant medicinal benefits and certainly we’ll move pretty quickly to ensure that we legalize the use of marijuana for medicinal purposes,” Prime Minister Browne said then..

“Now, the Government is going one step further, arranging for this agricultural product to be grown under certain conditions and eventually turned into useful pharmaceuticals that can relieve discomfort and pain in sickle-cell patients, epilepsy, asthma and other human diseases.

“One of the experts in the group has promised to return to Antigua in a few weeks in order to provide further assistance with the realisation of the new revenue-raising method which will be pursued vigorously,” the statement said.

The government has already said it would  embark on a public education campaign against the abuse of marijuana. 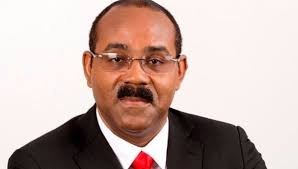