Petitions to expunge certain marijuana offenses can be submitted to superior courts starting today – thanks to the voter-approved Prop 207. The Smart and Safe Arizona Act, which legalized recreational marijuana use for adults 21 years and older and passed with 60% of the vote, also introduced a chance to expunge certain marijuana-related arrests, charges, adjudications, convictions and sentences.

Beginning July 12, 2021, an individual who was arrested for, charged with, adjudicated or convicted by trial or plea of, or sentenced for, any of the following offenses based on or arising out of conduct occurring before the effective date of this section may petition the court to have the record of that arrest, charge, adjudication, conviction or sentence expunged.

The crimes that can be expunged include:

Why should I have my record expunged of a previous marijuana crime?

There are benefits to having your record expunged of marijuana-related convictions. If you have a felony conviction, expungement can restore your civil rights, including:

If you were convicted of a misdemeanor marijuana charge, having your record expunged will make it easier to obtain housing, secure a loan, improve a situation involving custody of your children, and pass a criminal background check for employment or to join an emergency services department.

What led to the change?

A.R.S. § 36-2862 came about when Arizona voters supported Prop 207 (Smart and Safe Arizona Act) in November 2020, which legalized recreational marijuana in the state. With the vote, Arizona became the 13th state to legalize recreational marijuana use and possession for those 21 and older. Prop 207 was placed on the ballot by the residents of Arizona and it passed with an overwhelming 60 percent of the vote.

Will all marijuana-related charges be thrown out?

No – only the ones covered by Prop 207, and only charges brought by the State of Arizona. That means that if you were convicted of federal marijuana crimes, you cannot have your record expunged, because marijuana is still considered a controlled substance by the federal government.

Other marijuana-related charges that currently may not be expunged include:

Who can see my record once it’s expunged?

The state of Arizona has long been known as a “set aside” state when it comes to criminal records. This means that any conviction on your record would appear on a background check but would be noted as being “set aside.” If you were to have your record expunged, no one can see it except for you and your attorney.

Can a current case be thrown out?

Yes, Prop 207 requires all current cases involving actions that are now deemed legal by Prop 207 to be thrown out. Under the new law:

On motion, the court shall dismiss with prejudice any pending complaint, information or indictment based on any offense set forth in subsection A of this section, to include charges or allegations based on or arising out of conduct occurring before the effective date of this chapter. The individual charged may thereafter petition the court to expunge records of the arrest and charge or allegation as provided in this section. A motion brought pursuant to this subsection may be filed with the court before July 12, 2021.

Maricopa County has already begin dropping/dismissing any pending charges related to these crimes. Even if you are up for, sentencing, in a diversion program, pending trial, or facing a probation violation because of marijuana use, possession, transportation, or cultivation, these specific charges can be dropped.

How will my record be expunged?

It’s important to note that records cannot be expunged before July 12, 2021. However, there is nothing stopping you from working with Arizona lawyers handling expungement cases right now to begin the process. There’s plenty of paperwork that will need to be prepared prior to the filing date, and if the State wishes to deny your petition to expunge your record, you will want an attorney to represent you at the hearing. 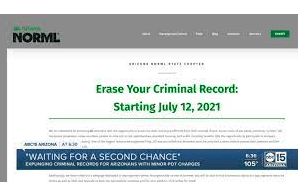