Article: Cannabis Legalization in Nigeria; Storm in a Teacup?

Have a quick read of this and see the links below.

While most look at South Africa and Morocco as the cannabis giants of Africa. We suggest Nigeria could actually be the emerging giant once they get past the political disagreements.

Early 2019, Mr. Rotimi Akeredolu, the executive governor of Ondo State suggested that the state might explore cannabis cultivation for medicinal purposes in its quest to create employment and engender growth. Expectedly, the suggestion generated public uproar due to the notoriety and addictive tendencies of the substance. Currently, the planting, harvesting, and consumption of cannabis (popularly known as Indian Hemp) according to the Dangerous Drugs Act (DDA), 1935 and Indian Hemp Act (IHA), 1966 is not allowed in Nigeria. The ban exists despite the growing commercial importance of cannabis globally. Advocacy for the government to allow the growing of the plant for medicinal and commercial purposes is growing by the day.

Despite the existence of the ban on cannabis however, Nigeria continues to be one of the major consumers of the product globally according to media reports. A report in the Telegraph found that the country ranked third in the world in terms of numbers of people who consume it. Most cultivation of the plant is reported to take place in the states of Edo, Ekiti, Delta, Ondo, Osun, Ogun and Oyo where the tropical climate helps the plant to thrive.

The plant’s economic potential cannot be overlooked. According to a recent release from Bloomberg, by applying the plant for recreational and medical purposes, the market would be worth US$90.4bn by 2026. Apart from its medicinal properties, the plant can also be used for making fabric, rope and paper which can be a major source of foreign exchange for the country and also create employment opportunities.

Speaking recently at a press conference in Akure, the Chairman, House of Representatives (HOR) Committee on Media and Public Affairs, Mr. Benjamin Okezie noted that the government is intensifying efforts to diversify the economy through agriculture and that Indian Hemp is an important component of that plan. He said, ‘Industrial hemp is a variety of the cannabis sativa plant species that is grown specifically for industrial use. Once harvested, the crop has a high yield of edible proteins and fibres with more than 50,000 product applications.’ He noted that he has presented the Dangerous Drugs Act amendment bill, 2020 to the House of Representatives for consideration.

We acknowledge the concerns of many Nigerians around legalising the plant considering the potential for abuse and the inability of the law enforcement agencies to effectively regulate its use given the widespread corruption in many institutions. Also, the country has a growing population of unemployed youths who typically tend towards substance abuse. That said, we cannot overlook the economic potential the drug holds for the Nigerian agricultural sector. The cultivation and commercialization of the plant can potentially generate much needed foreign exchange earnings, create employment opportunities and contribute significantly to the growth of the economy.

Fresh debate rages over regulation of medical Cannabis in Nigeria. The recent decision by the National Drug Law Enforcement Agency (NDLEA) to go after supermarkets, confectionary stores and others dispensing Cannabis cookies has raised the debate whether medicinal values of Cannabis cannot be isolated from the harmful effects.

The clampdown on Cannabis sativa, also known as Indian hemp and marijuana by NDLEA, has been a long drawn battle over the years. But of late, many countries have adopted the healthy side of Cannabis in treatment of various chronic diseases. The weed grows luxuriously in the country, in parts of Ondo, Edo and Delta states

The governor, on Monday, May 13, 2019, was in Thailand with the former head of NDLEA, Muhammad Abdallah, for a programme on medicinal cannabis extract development.

The governor said Nigeria would be shortchanging itself by not tapping into the economic value of marijuana, a banned substance in the country.

He said the enterprise, under the supervision of the NDLEA, would create thousands of jobs for Nigerians if seriously considered by the Federal government.

He said: “We all know that Ondo State is the hot bed of cannabis cultivation in Nigeria. We know how to grow it and it thrives well in the Sunshine State. With an estimated value of $145 billion in 2025, we would be shortchanging ourselves if we fail to tap into the legal marijuana market.

“Our focus now is Medical Marijuana cultivation in controlled plantations under the full supervision of the NDLEA. I strongly implore the Federal Government to take this seriously as it is a thriving industry that will create thousands of jobs for our youth and spur economic diversification.”

The programme centred around building capacity and researching the modality of licensing for planting and extracting cannabis oil in Nigeria as well as exploiting its commercial potential with focus on Ondo State.

Little wonder some doctors especially oncologists in Nigeria, United States (U.S.), United Kingdom (U.K.), Canada among other countries recommend it for their patients.

Even Coca-Cola is considering developing a drink containing Cannabis. Coca-Cola had said it was eyeing the cannabis drinks market.

Coca-Cola said it was monitoring the nascent industry and is interested in drinks infused with cannabidiol, or CBD- the non-psychoactive ingredient in marijuana that treats pain but does not get one high.

Some doctors in Lagos, who preferred anonymity told The Guardian they prescribe decoction of Cannabis for cancer patients. 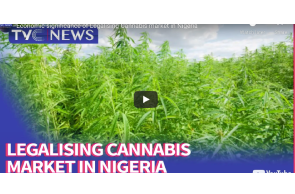