The discussion is beginning to start in India. Here’s a recently published article in  “The Print”

Cannabis is integral to India. So, the big question is: Why don’t we legalise and tax it like alcohol and tobacco?

egend has it that the shade of a tall cannabis plant once brought Lord Shiva relief from the blazing sun. Curious, he chewed some of its leaves and felt so invigorated that he adopted its usage—hence the use of cannabis in Shiva worship. The plant and its forms are known by various names around the world—marijuana, Mary Jane, weed, pot, hemp, and grass. In fact, there are more than 1,000 slang terms for the humble cannabis, a plant that can be used in various forms. But in India, its most common avatars are the trinity of bhang, ganja, and charas.

Bhang is a paste derived from grinding cannabis leaves and stems together, while ganja—or weed—is more potent and made from dried flower buds of the plant. Charas, the most intoxicating among the three forms, is a resin that is obtained by rubbing cannabis flowers for hours; the longer the better. It is often called hashish. The Nizari Isma’ili militants of 11th century Persia smoked it, hence the term hashishin, which is the etymological root of the word ‘assassin’.

Cannabis is integral to Indian culture

The earliest reference to cannabis is contained in the fourth book of the Vedas, the Atharvaveda, which refers to it as one of the “five kingdoms of herbs that release us from anxiety.” Its uses are also mentioned in the Sushruta Samhita and the Bhava Prakasha. A reference in the Ashtadhyayi of Panini reinforces the view that cannabis was known to Indians even 2,300 years ago. During the 10th century CE, it was called the ‘food of the gods’. Around 500 years later, its virtues were listed as astringency, heat, inspiration, and the capacity to eliminate wind and phlegm. In the 16th century, the Sanskrit play Dhurtasamagama depicted two vagabonds quarrelling before a corrupt judge. Before passing a verdict, the judge demands payment for his decree and is readily offered bhang. The Rajvallabh, a 17th-century text, went on to equate it with amrit, the nectar of life.

For centuries, bhang has been a symbol of festivity and hospitality in India. No marriage, coronation, or harvest has been complete without it. As a Holi staple, thandai is made by boiling a mixture of milk, sugar, cannabis, poppy seeds, pepper, ginger, cloves, cardamom, almonds, pistachios, nutmeg, and rosebuds. Bhang is even found in pakoras, halwa, and pedas! Sadhus have used it from time immemorial as a means to alter spiritual consciousness. Rarely can you visit the banks of the Ganga without coming across a sadhu and his chillum, a conical smoking pipe made of clay.

Cannabis has also been indispensable in war. Indian folk songs from the 12th century talk about bhang as the ‘drink of the warriors’. Soldiers would usually take a swig to eliminate any fear or panic. One such story describes the frightened soldiers of Guru Gobind Singh (the last Sikh Guru) when confronted by a wild elephant with a sword pierced in its trunk. Eventually, one of the soldiers consumed bhang, which gave him the courage to slip under the elephant and kill it.

Also read: Does criminalisation curb drug consumption? What the use of NDPS Act in Mumbai tells us

Bias in legislation on cannabis?

Given our ancient Indian connections with cannabis, I wonder why this herb has sparked so much debate and outrage in recent times. Canada, Mexico, South Africa, Uruguay, Georgia, the Australian capital region, and 18 states of the US have legalised the recreational use of the plant. This was possibly prompted by a 2015 study by Lachenmeier and Rehm, which found that alcohol and nicotine were far riskier than cannabis on a ‘margin of exposure basis.’

So, the big question is this: Why don’t we legalise cannabis and tax it like alcohol and tobacco? After all, India earned a whopping Rs 1.75 lakh crore in 2019-20 from taxes on alcohol. The Indian exchequer collects more than Rs 53,000 crore each year from tobacco products. We don’t ban those products. We simply make them terribly expensive for consumers.

Currently, the Narcotics Drugs and Psychotropic Substances (NDPS) Act of 1985 frames India’s regulations around cannabis. While the Act prohibits the sale and use of cannabis resin and flowers, it permits the use of its seeds, stems, and leaves. In effect, bhang is legal, while ganja and charas remain illegal. But does that really make sense? After all, the alcohol content of beer, wine, vodka, and whisky vary widely. For beer, it is around five per cent, wine is at 12 per cent, vodka is at approximately 40 to 45 per cent, and whisky is at around 40 per cent. Do we make one legal and the other illegal because of its potency?

Also read: NCB is high on NDPS — the law with loopholes. Rhea Chakraborty to Aryan Khan

Economists have always craved ‘Big Bang’ reforms in India. To be fair, the Narendra Modi government has been earnestly working towards them. The Insolvency & Bankruptcy Code, 2016, Air India’s privatisation, the GST Law, the Jan Dhan-Aadhar-Mobile trinity, labour legislation, agricultural reforms, the Ayushman Bharat Yojana, the Gati Shakti Master Plan, and rationalised telecom policy are examples of that. But judicial reforms have been progressing at a snail’s pace. In order to reduce the pendency of cases before courts, the government has been making an effort to curb useless litigation by government departments, a prime example being income tax disputes. But 72,000 people were arrested in 2019 alone under the NDPS Act, with the vast majority criminalised for cannabis possession or consumption. Wouldn’t our country’s drug enforcement resources be better utilised in going after cocaine, Ecstasy, heroin, or mephedrone? Could we consider this as a future ‘Big Bhang’ idea?

Noah Sweat, a judge, law professor, and representative in the Mississippi legislature was once asked about his position on whiskey. He replied, “If when you say whisky you mean the devil’s brew, the poison scourge, the bloody monster that defiles innocence, dethrones reason….then I am certainly against it. However, if by whisky you mean the oil of conversation, the philosophic wine, the ale that is consumed when good fellows get together…then I am certainly for it.” Isn’t it time for us to take an alternate view on cannabis too?

Ashwin Sanghi is the bestselling author of The Rozabal Line, Chanakya’s Chant, The Krishna Key, The Sialkot Saga, Keepers of the Kalachakra and The Vault of Vishnu. Views are personal. 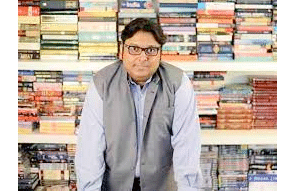