The Santa Fe New Mexican publishes a nice little piece that illustrates the changes in society with regard to cannabis.

Linda Trujillo warned her youngest son about the evils of getting caught with marijuana when he went off to college.

It could ruin his ability to get student loans, she cautioned.

Worse, Trujillo told him, it could destroy his career, including his plans to go to law school.

About a month ago, the pair had another conversation about marijuana. But unlike the heart-to-heart between mother and son years ago, they didn’t talk about the perils of pot.

This time, they spoke about the opportunities that lay ahead, said Trujillo, who, as superintendent of the New Mexico Regulation and Licensing Department, is now the point person overseeing much of the rollout of New Mexico’s just-approved legalization of recreational marijuana, which many hope will create thousands of jobs and inject government coffers with millions of dollars in new revenue.

“I called him right after the vote that we legalized cannabis in New Mexico,” Trujillo recalled recently about the March 31 conversation with her son, who is now in his second year at Columbia Law School and reminded his mother of her warnings from years prior. 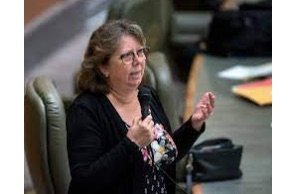